We had an average start at last week's Het Nieuwsblad. We had Flecha at #3 and Langeveld at #10, but Matt Hayman wasn't even on the predictions. That gives us a score of +33. Let's see how we do with Montepaschi and the famous white sand roads. Visconti tops our list. He was 6th last year at this race and had a win last week. If I was a betting man.......how about 16-1 on Cancellara, take it and run. 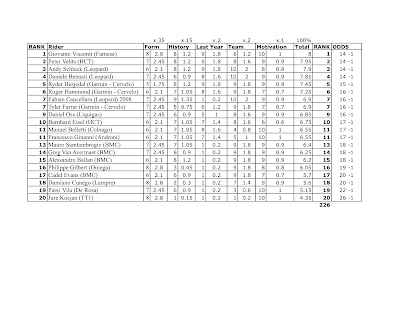 Posted by Shaun Radley at 11:24 AM No comments: Links to this post

Sam Schultz Checks in on Cyclingnews

Bozeman is stepping up their triathlon game. The Bozeman Tritons Triathlon Club is not only a bunch of good racers, but a promoting machine. The Treasure State Triathlon and Headwaters Half Ironman are both based out of the Bozeman area.

The club's website has all the race information.
Posted by Shaun Radley at 8:40 AM No comments: Links to this post

Likes
Team Sky's winning tactics
Chris Sutton is a good sprinter, but he's mostly been known for his solid Tour Down Under's and Australian Criterium skills. Sport Director Steven de Jongh supposedly switched tactics with 10k to go and told the team to work for Sutton instead of Boasson Hagen. Sutton had a well timed sprint and was very confident, but the work of Juan Antonio Flecha and Boasson Hagen in the final 7k was impressive. Flecha pinned back Boonen's suicide break and Boasson Hagen provided a phenomenal lead out. Kudos to a solid team effort, good management from the car, and wonderful sprinting.
Tom Boonen tries to hold to his word
With 7k to go Boonen flew from a group of 60 to go it alone. Earlier in the week Tom had told the press he no longer considers himself a sprinter. Three years ago, the 60 person group in a spring classic was basically Justin Bieber at a sweet 16 party........a sure hit. I like that he's trying new things, but I hope he doesn't forget that he still has a nasty kick. It was entertaining.
Dislikes
Greipel frowning on the podium
The Gorilla gets his first shot to be the #1 sprinter and he takes 3rd. I don't think that's a bad result. There were fast guys in the sprint. He beat Farrar and Ravard (who's been on fire this year). Winning is winning and I understand that, but I don't want to see people who are pissed on the podium.
Sunny Classics
It doesn't seem right to see the sun at one of these races. Especially, when I look out my window and see 5 feet of snow. I want inspiration......these races are supposed to make Montana racing look tame.
Posted by Shaun Radley at 6:44 PM No comments: Links to this post