Toby Climbs the Ladder at the Capitol

Herzig fights a mechanical and Morgan rounds out the podium. 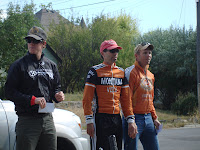 Toby Meierbachtol is one of the best cross racers to have never won a Montana Series Event. Sunday in Helena that all changed. Meierbachtol gave himself and his sponsor, Hellgate Cyclery their first victory. Scott Herzig rode through the field and into second position after a mechanical. Brad Nails Morgan held on for 3rd. Jamul Hahn, Landon Beckner, and Geoff Proctor all showed good early season fitness and placed high in Helena.
Mark Brooke and Great Divide impress with first year event. 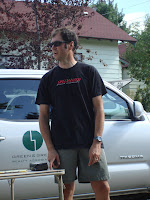 The course didn't allow for much pack riding, which is good for the early season. It was nice to suffer like a dog and try to find your pace. Another cool component of the course was the urban nature. It was basically in a housing development right outside of downtown Helena. Neighbors and volunteers seemed to be enjoying the action. The race organization and officials were excellent. I hope to see this event as a permanent fixture on the Montana Calendar.
Curtis and Blair take on large fields.
Aubree Curtis and Blair Fisher took wins in the cat 4's and masters B's. The fields were relatively large and both riders had to push their limits for the victory. Mechanicals plagued some of the favorites in this category. Jason Delmue and Byron DeFord both had un-timely issues that took them out of contention. That battle between Byron and Blair was shaping up nicely.
Toby and Ingrid take their leads to Butte.
Hellgate Cylery Riders both control the series' after one race. With Currys, Frank, Flathead, and more Msla riders; Toby and Ingrid will have stiff competition. Scott Herzig showed strong early season form and has a proven track record at the Copper Mountain Sports Complex. Also, Landon Beckner was in 2nd place for a portion of the race on Sunday and should only get better throughout the season. Register early to help out John C and the Butte crew.
Butte Registration
Butte 2010 Results
Photo by Ingrid Lovitt
Posted by Shaun Radley at 3:35 PM