Kiefer and Lisa take Round 2 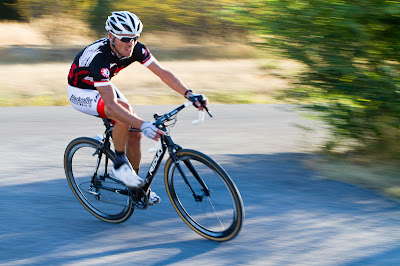 Photo by John Sieber (his gallery will be up this evening http://www.jpsphotos.net/gallery/bicycleracing.cfm?m=3) 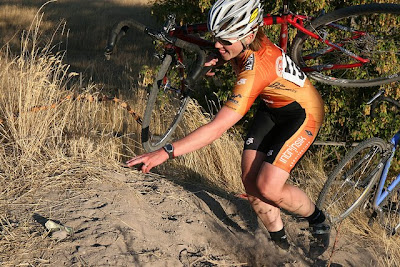 Kiefer Hahn rode solo for almost the whole race, to win his first Wednesday Night Cross Race. Sam Schultz patrolled affairs from behind to finish second on his single speed. Rounding out the podium was Bob Presta who's form is improving week to week. Toby Meierbachtol flatted out, but was the only rider to match Kiefer's initial move. Hahn moves into the ever important series lead with 4 races to go. His teammate Presta slots into second.

Lisa Curry was in town for the evening and decided to race. The course suited her abilities and she flourished at the fort. Ingrid Lovitt continues her consistent riding to finish 2nd. In third was Sarah Halvorson who is going to just keep getting faster each week.

Rob Sayler has a nice hold on the masters A series. He won his second race in row. What a great Master A field; Travis Howard, Troy Kindred, John Fiore, and Jeff Brooks. Mo Mislivets also collected her second win of the series in the women's B category. Also, of note was first time cross racer Kellie Carim getting 2nd place on the evening.

Bozeman double weekend on the horizon

Scott Herzig, Anna Dingman, Aubrey Curtis, John Fiore, and Blair Fischer will have their hands full as they try to defend their series leads. With the exception of Curtis all current leaders have just one win. Currys, Brooks, Howard, and Randy Beckner are all riding strong and will challenge our current leaders.