Classics season starts tomorrow. At the bottom of this post is a full spreadsheet of favorites to hold in your lap while you grip your laptop. (click it to make it bigger). Here are some highlights if you don't like stats:

#1) 11-1, 8.55 Edvald Boasson Hagen (Sky), Mini Eddie has been gaining form. He made all the selections in Qatar, and sprinted well at Oman, including a 5th in the hilly tt (Gesink won). Also he was top ten last year, and I feel like the course change this year actually helps him the most. His motivation is high, as he's still young and wants to put some notches in his belt.

#2) 11-1, 8.33 Philippe Gilbert (Omega), Impressive victory in Stage 1 of the Tour of Algarve. Looks a bit heavier then his 2o10 late season blitz, but the other favorites are naming him as the one to beat. Also on his side are two victories at this race in 06' and 08'. His perceived lack of motivation for this "semi classic" puts him behind EBH.

#3) 11-1, 8.1 Juan Antonio Flecha (Sky), He made all the selections at Qatar and is always hungry for a big win, as his lack of kick has hurt his career win total. He's the defending champ and comes with a stacked group of domestiques in Stannard, Barry, Hunt, and Arvesen. Also with EBH's sprinting a group might be more lax about letting him go.

#4) 12-1, 7.6 Tom Boonen (Quickstep), Tom says he's not a "pure sprinter" anymore. That doesn't mean he can't win from a group of 30. He looked good in Qatar but then again he always does. He's never won Omloop (Het Volk), but he says if the tactics are right he'll go for it. Chavanel is dedicated to Boonen, he's proved that over two seasons. If he's in the move expect the crazy eye from Tornado Tom, he needs a win after a disappointing year.

#5) 12-1, 7.35 Lars Boom (Rabobank), The squad is putting faith in Lars. They came out in the press and said he was a co-leader for the weekend. Boom has been sprinting well and won the prologue at Qatar. He's a trendy pick, but the stats back it up. He doesn't have a whole lot of history with this race, but he's highly motivated for Rabo and himself and is carrying tremendous form. 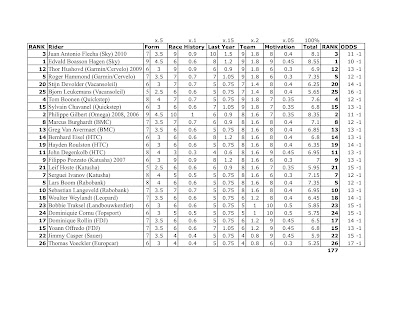