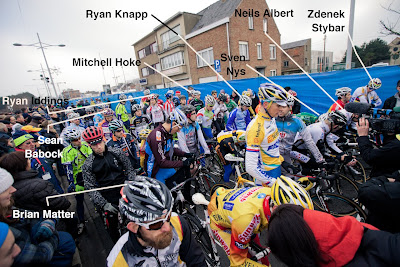 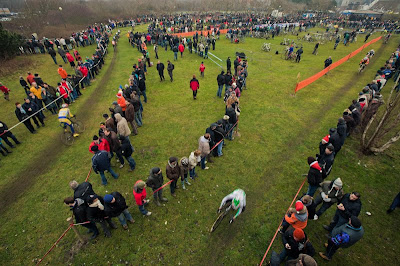 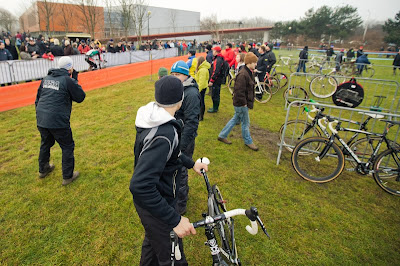 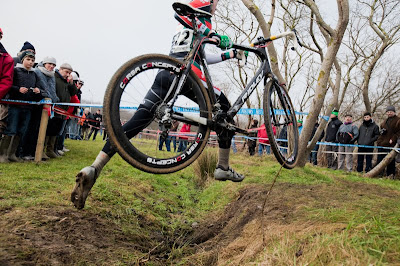 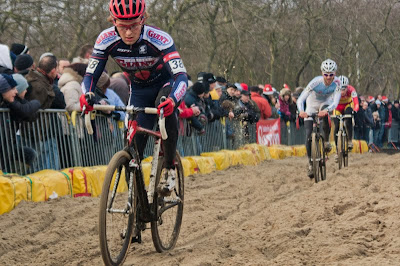 The day after the race in Loenhout was a smaller race in the coastal town of Bredene, Belgium. Thouhg it was smaller, it had three big riders coming for the elite race in the names of Sven Nys, Neils Albert and Zdenek Stybar. For the last couple of races, those folks had been on the podium anyway, so it was surely going to be a battle.

Matt Clark and I drove together to the start, just like the last few races. (Matt is a former Missoulian who many of you may know. He is the media director of the camp, keeping the eurocrosscamp.com site going, as well as the facebook and twitter post. Matt is also a film guy who has been shooting a ton of video this year for a short documentary of the camp) I mention that we've been driving together, because when we do, we get the most amazing parking spaces. It seems to pay off that we are Americans, and not really sure where we are going. That, and the fact that I have this official looking card that says I'm with the Media, gets us some amazing parking spots.

We pull up across the street from Geoff and the racers, and the juniors are already on the trainers. Matt is focused on following Geoff today, while I'm excited about shooting the course. It's the first race since I've been here where there wasn't snow on the course....there was actually green grass. That, coupled with the fact that it was a smaller race, meant that it was a bit easier to get around. Though really, these "small" races here probably have 5 to 10 times the number of fans that the biggest cross race in the U.S. has.

The U.S. juniors got good call-ups, and when the gun (traffic lights) went off (green), the racing was on. There were a pair of Euro's off the front from the start, but a couple of American riders were in the mix early on. Jeff Bahnson, the U.S. National Junior champ, rode a solid race to finish 4th, while Zane Godby, a member of the CLIF development team, kept passing folks throughout to finish 6th.

Again it seemed like the Americans rode solid in the technical sections. This race was on a flat course, but had a little bit of everything. Notably, a long sand section that was definitely ride-able. This was the most fun for me as a spectator, seeing the riders "surf" the sand as they spun through it. The other feature that was unique to my time here was a "ditch section." This definitely had a Montana feel to it, as the riders dismounted to run over the ditch, around a tree, then back over a ditch.

The U23 and elite racers were both in the same field for the next race, with Nys, Albert and Stybar getting the first call-ups. However, Stybar was nowhere to be found when they were doing this, so when American Brian Matter got called up, he took the last front row spot. Brian is a Euro Cross Camp alum, and along with Mark LaLonde, came over from Wisconsin to join the racing fun during the holidays. I was a fan of Brian from the first race...there not too may folks with full beards racing these days. We need more of them!!

As expected, when the gun went off Nys, Stybar and Albert took off, and had a gap pretty fast. Seeing those guys zip around on that grass is pretty cool. They definitely were much stronger than the rest of the field. In fact, Geoff asked Nys before the race why he even came to it. Nys replied that it was training for the weekend races.

It was great seeing the camp racers mix it up with them as well. Ryan Knapp, a racer from Indiana, was having his best race of his time here when a crash took him out. He had to run quite a ways to get to the pit for a new bike, and eventually pulled out because of an injury that occurred during the crash. After the race was over, he was upbeat though. He had a tough race up in Loenhout, and this race gave him some confidence again. He went on to say that he didn't think that his arm was broken....

Nys, Albert and Stybar were together on the last lap, but a mistake took Albert out of the sprint. Nys and Stybar battled to the line with Stybar taking it.

For more shots, head over to TRP
Posted by tom at 7:14 AM