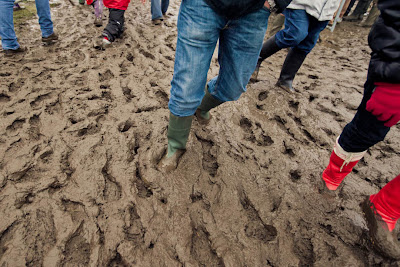 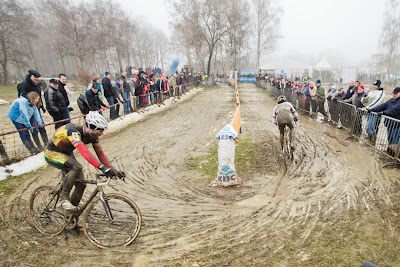 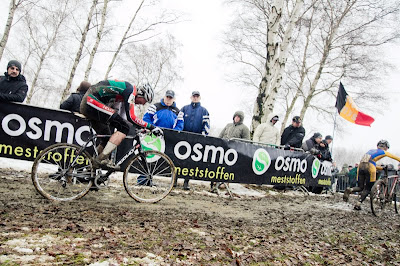 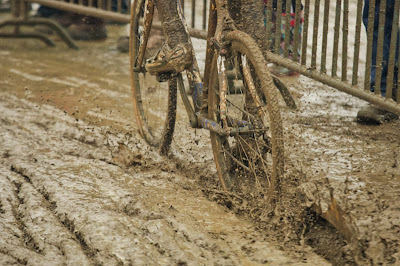 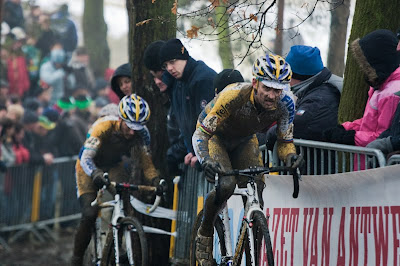 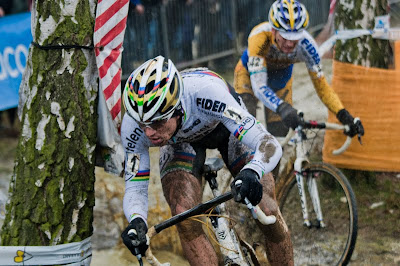 I've always been fascinated by this race. I knew nothing about the course, the town, or what type race it was. But what I wondered about was here was a race that was named after a current racer. How does that happen?

Well...I know a little bit more now. While all of the top cross racers, and top bike racers for that matter, in Belgium are big... Nys if like Tom Boonan. Really big. Nys is cross to a lot of folks. After Erwin Vervecken retired, Nys was the name that I knew best. He seems to have the most fans around his trailer during pre-race warm ups, and by my unofficial count, he has the most supporters. (It's easy to spot the riders supporters here. They have jackets that say "Sven Nys Supporter" and "Neils Albert Supporter" right on them. If you are a big supporter, you also carry a huge flag that says so. At this race, I saw one guy who had a HUGE fishing rode with a flag on top. The race is in Sven's hometown of Baal..so, he has his own race.

This race also had a feel of a Montana race, in that it's held in a park on the edge of town. The parking is on a tiny street in a neighborhood...it's so tight. I left early so that I wouldn't be shut out of the parking. But when I arrived at the "press parking" there were only 6 spots and they were all taken. The "race guy" told me I'd have to head back to the village and take a shuttle in. Damn. Matt wasn't with me today...had I lost my parking mojo? So I drove directly over to the racer parking, flashed my media badge, and just kept driving. I was able to get within a half block of the U.S. folks.

This was a GVA series race, so while the venue seemed tight, the crowds were going to be fairly large. At some of these races, there's a race that takes place before the juniors race. It's even a younger group of juniors. So I stopped by the press tent, picked up the photo vest and walked in to check out the course. The crowd was already starting to gather, and my oh my, it was already muddy. Today was going to be special.

When the Junior race did start, the mud was flying. It was tough to get around for me to shoot. Generally I'm in a spot for one lap, and then try to sprint to another spot. But it was more difficult today because of the number of people and the tight walkways. I noticed though that people weren't really walking off of the walkways, so I took off that way. Well, I found out real fast that nobody was out there, because as soon as I stepped off the pathway, I sunk down a bit into even deeper mud. From that point on, I just walked on the course. Generally with the photo vest, I can do this during the Junior and U23 races. And while I can be on the course to shoot the Elite race, they really don't want the photographers to walk on it during their race.

So I scooted around and shot, trying to focus on the pits. I had shot Geoff and the U.S. support crew in the pits in earlier races, but it was always a bit slow. Not today, they were hopping every lap. The pits have two sides to them. So the races come down one side early in the lap, head back out, and then later in the lap come down the other side. This allows the racers to have two chances for pits, with one crew being able to work both of them. (And also allowing the riders to have one spare bike instead of two)

The mud was so thick that the junior race split up in a hurry, and Geoff and company were sprinting back and forth between each side trying to keep everyone serviced. After two laps the riders were riding by with the grittiest sounding bikes I have ever heard. Just loaded down with mud and gunk. The more they rode, the muddier the course got. Andrew Dillman was at one point in 4th for quite a while, when on the last lap he went through a particulary muddy section and dropped his chain. It took a while to get going again, and he was able to hold on for 6th, followed by Jeff Bahnson in 7th. These were good results in a pretty good-sized field.

The U.S. only had 1 U23 racer in the next race. The Juniors changed and were headed out by the time the U23 race started, and the only support for Cody Kaiser was Geoff and coach Jim Anderson. Geoff was at the start to gather Cody's jacket, and then he sprinted to the pits to help Jim. Talking to Cody afterwards, he said he pitted every lap to lap and a half..and that it would have been almost impossible to finish without a fresh bike. Cody is an up-and-comer and has raced all over the country, even in the thickest mud that Portland has to offer. But he said he had never raced in anything like that.

I totally understood. I was having trouble walking around in it. As the Junior and U23 races progressed, more and more people kept coming through the gates for the Elite races. The more people that walked through the mud, the muddier it got. (A huge thanks goes out to photographer Chris Milliman who has shot in Belgium quite a bit, and told me that I needed large rubber boots) At one point, I was in one spot for no more than 60 seconds. I could feel my left foot sinking the longer I stood there. When I finally tried to move, I was stuck. Suctioned in a deep hole that took me another minute to free myself from.

All of the Euro Cross Camp Elite racers were taking today off, holding out for another race the next day. As the U.S. folks headed back to the USA House, I went back to the course. The racers started to a huge roar, and it only got louder as they passed the beer tent. Lars Boom, who was racing the cross races for training, led the first lap, when on an ultra-sketchy descent, crashed. Brian Matter and Mark LaLonde (two of the U.S. racers in the race, along with Jonathon Page) passed Boom by the time they got to me.

Matter was even running down that descent. During the pre-ride of the course he realized that his brakes weren't really working on it, and in fact, he just kept picking up speed. He switched brake pads then went back out, and again...he kept gaining speed. It might not have been a problem, but there was a tree halfway down that the racers had to swerve to avoid. He figured that he lost about 5 seconds a lap doing this, but it beat a broken collar bone.

Boom pulled out when he went by the finish line, and the race was on yet again between Albert, Nys and Stybar. Eventually Nys and Stybar pulled away and it was a two-man battle. I worked my way up at the top of a climb and got to see for the first time the pain on the racers faces. It was a slow, painful slog up the muddy climb and everyone was hurting. I sat in that same spot for three laps, not wanting to go deeper into the course because of how long it would take me to make it through the crowd back to the finish.

With a lap to go, in the last muddy section, Nys made a pass of Stybar and opened a gap to take the victory. It was his tenth victory of "his race." And it was well-earned.

I didn't see much of anything else after this. As soon as he crossed, I literally grabbed my bag and sprinted all the way back to my car. There were so many folks on the course, once they started filing out it might take hours for me to make the 15k drive back to the highway. I realized two things while making the dash; one, large rubber boots, loaded down with mud, are definitely not made for running, and two, after almost three weeks in Belgium I had not exercised at all and man...that mad dash put the hurt on me!

As always, you can go to TRP to see more photos.
Along with my last write-up for CXMagazine.
Posted by tom at 7:46 AM