Curry wins, followed by Franky, and Jdoll.
Posted by Shaun Radley at 5:47 PM No comments: Links to this post 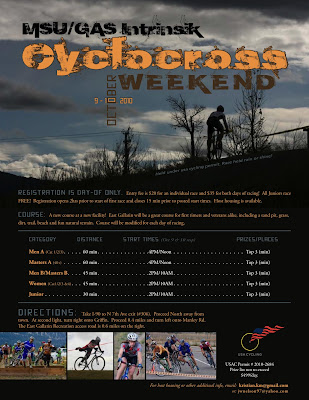 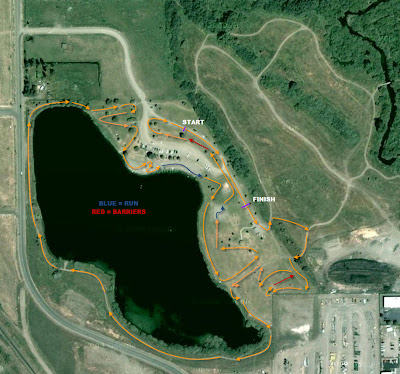 Posted by Shaun Radley at 9:41 AM No comments: Links to this post

For the first time in many years, Sam rode a cyclocross bike at last night's Wednesday Night Race. It worked out for him as he took his first cx win of the season. He's un-decided on the bike choice for Rolling Thunder. 2nd place was series leader Jesse Doll and 3rd place was a Moab bound Toby Meierbachtol.
Posted by Shaun Radley at 9:00 AM No comments: Links to this post

Rolling Thunder - 2008 Who the heck is Tyler Hurst?

The category 4 race at the 2008 Rolling Thunder had numerous story lines. None better, then that of Tyler Hurst. The first year racer, with a competitive spirit and solid bike handling skills.

If you don't remember the 2008 cat 4 cyclocross scene, let me know take you back in time. 2008 was the year we met Karl Vanderwood. The Flying Dutchman was not yet on MT Velo, and was sweeping cat 4 races left and right. Also, in the mix during 2008 was Jesse Doll, Dan Pierce, and Jason Delmue.

During the race the selection was made early. Hurst, Bandito, Delmue, and KV were in a group of 4 navigating the technical course. As the race wore on attacks started to fly. Each rider took turns trying to punish his opponents. Each time the riders would claw back together. From the Wild Rockies Trailer I could see the Tyler Hurst fan club starting to buzz. Hurst's family and friends began to realize he could win this thing. Going into the last lap, in my head I gave Tyler less then a 2% chance of winning. I'd seen Karl and Jason race all season, and I quickly learned of Bandito's racing resume. I think he was even gapped a little bit heading into the sections I couldn't report on. We waited patiently to see who would come around the last corner first. I saw the bright yellow jersey and laughed a little into the microphone. Not because it was funny, but because I couldn't believe it. Hurst had 10m on his nearest opponent. He came into the finishing straight and the crowd gasped. The Red Dragon and his family rushed the straightaway. THurst looked at his dad and said "That one was for you."

I look forward to this year's story.

Photo by John Sieber
Posted by Shaun Radley at 7:50 AM No comments: Links to this post

Phil "Pipo" Grove doesn't do much quietly, but some how he's been sneaking in some top notch cyclocross performances.

Grove started his season at Star Crossed (34th), then moved to Rad Racing (24th) and recently finished 2nd at the Starbuck's GP.

Thinks are looking up the Hammer Man. Next stop Moab.
Posted by Shaun Radley at 2:12 PM No comments: Links to this post

Once again Moose Cross did not disappoint. Good courses, competitive racing, and lots of extracurricular activities. Here are my highlights from the weekend:

- GAS ladies cyclocross team is on fire. Frykman, Curry, Dingman all racing well. Watch out at the Thunder.

- The Knotty Pine in downtown Victor has good food and a sweet atmosphere.

I'll try and get a link to some photos and results. I said this on last year's post but Moose Cross really is a can't miss event. It's the best family/community oriented bike race I've ever been too.