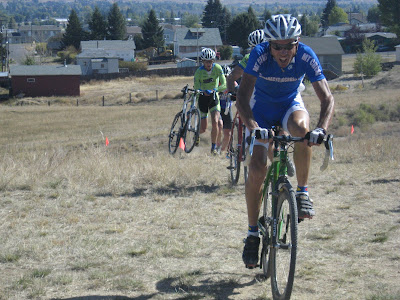 Montana Cyclocross Season kicks off this weekend in Butte.

Warren is back with Psyclocross and John continues the tradition at the Copper Mtn. Sports Complex. Both of these events are can't miss. Register and find details here.
Posted by Shaun Radley at 8:58 AM No comments:

The Missoula Pro XCT is scheduled for July 23rd and 24th. Amateur categories will be on the 23rd and UCI categories will be on the 24th.
We are honored and excited to be selected as part of the series. Having the best North American mountain bikers in your backyard is an amazing opportunity and we will give them the attention they deserve. However, I want all Montana mountain bikers to take ownership over this race. This is a celebration of mountain biking in Montana. This race is for all the hard core MT racers and riders that seldom get the chance to shine. Think of Rolling Thunder times 20. The focus will be on having a good time and racing hard.
Before the official roll out and website, here are a couple facts about the race.
- The venue is Marshall Mountain. We are cutting trails and creating a race course this Fall and next Spring. Go Marshall!
- There will be a 4 week Working Man/Woman Series on the course in June. This will be held on Wednesdays.
- The two UCI races will be on Sunday. Elite men and elite women.
- There is a group of core sponsors who are making this race happen and deserve a thank you from now until eternity. Cafe Dolce, Missoula Bicycle Works, Zillastate, Momentum, Big Sky Bikes, Kent Brothers, Marshall Mountain and Sean Kelley's.
- The crew who puts Rolling Thunder on is the same crew putting this on. We know this is a big step so we've reached out to local experts and Montana cycling circles. Together as one big community we are going to make this thing happen.
The race website will be rolled out in the next two weeks. If you have questions or you want to be involved in the race feel free to email me, montanacyclocross@gmail.com
Link to USA Cycling article.
Photo by tomroberstonphoto.com
Posted by Shaun Radley at 7:42 AM 1 comment:

Thanks to some very supportive sponsors, Rolling Thunder is stepping up it's course organization. Jedzilla has donated custom course tape, longer stakes, and a drill bit to help keep those stakes into the ground.

On a side note Horan and Nathan Jensen have been out with a motorbike trying to smooth the course out. Doug has some good ideas as well. Expect the same gnarly features, but hopefully a lot smoother in between.
Posted by Shaun Radley at 8:26 AM No comments:

http://cog.konaworld.com/archives/4956
Posted by Shaun Radley at 8:24 AM No comments: 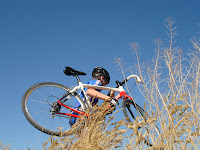 Bridger Fiore, is going to be a beast. He's grown and is ready to compete with the best juniors in the country. Look for Bridger at all the big races and cat 4 fields in Montana.

Lindsy Campbell, was a cyclocross revelation last year. She finished 2nd at collegiate nats. LC splits her time between repping the UM Cyclocross Team and mtcx.com.

Heidi Gaskill, is new to the team this year. She has a super good attitude and anytime she races she's a threat. She's got a busy schedule, but look for her at Thunder.

Joey Lenaburg, is mentally tough. After her super human volunteer of the year, Thunder victory last year I had to have her on the team. It seems like each year she gets a little bit better a cross. I think this year will be her biggest jump. 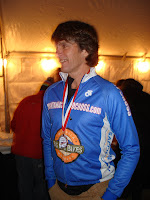 Mike Longmire, is a staple in the national master's scene. This is Mike's 2nd year on the team. He's podium-ed at Rad Racing and Nationals. Mike is a great all around rider. ML will be rocking the Specialized Crux this season.

John Fiore, is the glue that holds the team together. He's finished high in national races (including a 4th this year at Rad). John excels in muddy, technical conditions.

Jesse Doll, had a breakout season last year and looks primed for big sophomore season. Two top 37 rides at Starcrossed and Rad, build this riders confidence as he joins the elite field. Jess is a great all around rider, built on excellent technical skills and solid flatland power.

Bob Presta, was the team's best rider last year. He won the Wednesday Night series, placed top ten at Thunder, and won a race in the Flathead. He's back again this year. Bob is one of the best technical riders in Montana, and is known for his killer instinct.


Ben Horan, is back. After a couple rough seasons

Horan is back and looks to prove his Helena prologue time was no fluke. In all seriousness the Flying Horanimal will be in the mix on a new Giant TCX. Great technical skills for an ex tri geek, and power for days.

Josh Tack, always underrated on the cross bike, Tack came on strong at the end of last season. High finishes at Polson and the Wednesday Night #5. Josh can do anything on a bike and cyclocross is no different.

Brian Williams, is coming off his best road season to date. He's got a new Giant TCX and a motivation to stay fit over the Fall. Brian is another good all around rider, but excels at power out of corners and sprinting.

Scott Lenaburg, has made the jump to the cat 3's and is one of two riders to join the mtcx elite ranks. Scott is a heady rider with solid power. He's looking to jump in with the big boys and make an impact.

Cameron Johnson, new to the team and new to the cat 3's. I'm excited to have Cameron on the team. He is my first rider from outside of the Missoula area. He's based out of Big Sky and loves cx. Look for Cameron to show up big at the Bozeman and Billings weekends.

Jeff Cincoski, is a wild card. Every team needs someone like Jeff. He keeps the team morale high and is a selfless rider. I expect improved results from him this year as he's transitioned his focus to the cx bike.

Team Riders:
Sara Raz - In her second season of cx, Sara is ready for action at the Wednesday Night Series
Kyle Shannon - An excellent supporter of cx in MT, Kyle will be popping up at the W.N.S.
Zeb Ruby - Look for Zeb to be catching air and rallying his cx bike at race near you!
Chris - He is a new junior rider who's pumped on cyclocross.
Brent Ruby - His early cx season will be spent focusing on Ironman Hawaii, but look for him in the 2nd half of the season.

Posted by Shaun Radley at 10:26 AM No comments:

Fiore and Wehyrich in Cyclingnews

Pic of John Wehyrich
Pic of John Fiore
Posted by Shaun Radley at 7:00 AM No comments: