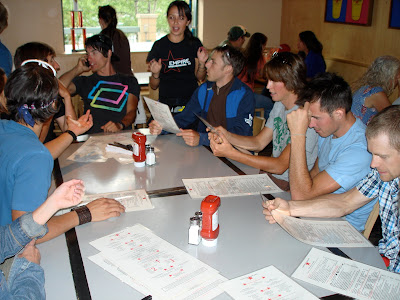 Even more so then cyclocross, mountain biking is something that all Montana endurance athletes do. I over heard a conversation Brian Williams had at Elkhorn....it went like this:

Dude: Hey, how do you guys train in Montana?
Brian: We just ride really hard and long on dirt roads.

While not everyone rides hard and long on dirt roads, the majority of racers in Montana train and ride on the mountain bike quite a bit. Last Fall I got really pumped at a Wednesday Night Cross race where athletes from all disciplines came together for one evening. That's what makes a special Montana Race.

The stars have aligned again. Runners, mountain bikers, road bikers, and cyclocross'ers will come together on Saturday. The Missoula Marathon was won by Kiefer Hahn on July 11th. This Saturday he'll be at the start line for the Butte 100. John Curry won the Montana Road Championship last Sunday and was at nationals the weekend before. He'll be on the line. Butterfield and Grove were winning the 24hrs of Canmore last weekend. Parsons and Cary Smith are fresh off a 3rd and 1st at the Creampuff. Those are just the guys who have been racing...what about the guys who have made this a season goal....Muhly is flying, Martin is primed and ready, Doll, Gallegos, Pierce....

There are several good story lines starting to brew. The number one is the appearance of Tinker Juarez. He's a mountain bike legend and we are honored to have him racing in Montana against our best riders. Also, there are several 24 hr Moab racers testing their form. Doug Dale, Parsons, Pip, Butterfield, Owen, Gaskill and Toby will all be on course.

I'm excited to see how everything plays out. They hype is real.
Posted by Shaun Radley at 10:34 AM 1 comment: Links to this post 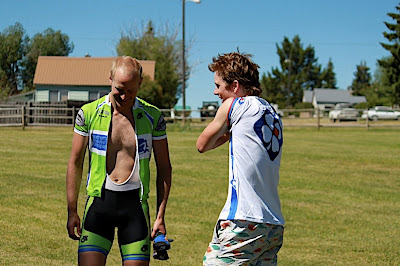 My favorite satellite radio station is NFL radio. Yesterday I spent 12 hours blasting NFL radio as I drove to Malta and back (shout out to the APC). The stations tag line is..."NFL....news.....notes......NUGGETSS!!" I'm a sucker for a good nugget. Especially when it comes to bike racing.

During the early stages of Sunday's race Jrad (Jared Nelson) jumped out in front of the field. Numerous people groaned and suggested Jared have a fun a ride. I knew it was my only chance to get over the pass so I asked Brad to let me out of the line so I could pursue Jared. I started riding hard tempo. I wasn't into the race yet and my legs and lungs quickly reminded me. I was still 20 seconds back when a green jersey caught me and said "don't pull." It was Jeffro.

He selflessly closed down the gap to Jared on his own and allowed me to save my legs for the climb. I know for a fact little things like this happen on the GAS team and other teams, but I've never had anyone do it for me. It makes you want to ride harder and give it your all. I wasn't a designated team leader or anything, but Jeff sacrificed himself for me. The best part about it is that until now only he and I knew about it. There was no glory involved. It was just a friend helping a friend. I can't wait to return the favor.

On another note. The Butte 100 is quickly turning into the biggest race in the state. I just got a confirm on Parsons, Muhly, Pip, and Butterfield. Also, heavy hitter Curry is thinking about coming. Mix those guys in with Martini, Tinker, JDoll, Kerry (Creampuff Champ), Dougie, and Gallegos.....and you've got a Montana Party. I'm telling you right now....don't miss it.
Posted by Shaun Radley at 3:24 PM No comments: Links to this post

Jeffro reports on the State Championship 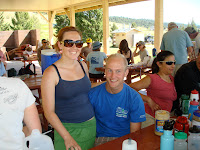 Jeff Cincoski has had quite the year. He completed is second Ironman in Couer d' Alene and upgraded to a cat 3 on the road bike. Yesterday, was his one year wedding anniversary. Look for Jeff on the cross bike this year rocking the MTcx jers.

The great thing about the state course, set up selflessly by John Wehyrich, of 5VV, was the out-and back nature of each leg, which allowed for great spectating off the back.

Following are my favorite mental images from the race:

Mile 10 Masters early glory: Big Al Gallego staging a dominating solo break off of the Masters A pack. He had a solid mile lead.

Mile 45: Men’s 1,2 field absolutely decimated by the rollers on the out and back just south of Georgetown lake. These climbs, which immediately followed Flint Creek pass, would establish the fate of most racers.

Mile 60-65, the grind from Anaconda up to Georgetown: Brian Williams on the brink as he fought the headwind a mere 20 second off of race leader John Curry. The situation would be similar for all of the riders. Noteable was eventual women’s champ Linsey Corbin, who appeared to be gaining, ground on men’s 3rd place Brian Frykman. The highlight of the grind was seeing the solid NRO CAT 4 domestiques pulling a pack hard into the wind as they raced among the Masters A field. Eventual podium finishers SteveZ. and Longmeyer bided their time well as their teammates brought back a break of early aggressors.

In the end I was really proud of my team. Folks did work all day on a course that definitely trumps Cow Country as the hardest in Montana. The trio of John, Eli and Miles provided exceptional support from the organizers, in spite of their few numbers. It made for a well-organized and safe race. Hats off to the organizers, overall champs Curry and Corbin, and the picturesque Pintlers for a real butt-whoppin’.

Posted by Shaun Radley at 11:22 AM 2 comments: Links to this post