Morgan Schmitt has won the Mt. Tabor crit and put on the leader's jersey. I'm super excited to see him riding well. Morgan's brother Evan makes some of the best cycling films. Dirty Moose Productions is the name of his company. Evan will be attending the Rolling Thunder week with the idea of potentially making another film. We're pumped to host him!

On a somber note......Brian crashed out of the crit last night. Here are his thoughts:

"I crashed out of the crit tonight just 3 laps in, broke my der. hanger. Bill wykoff went to bat for me so instead of being eliminated I am starting tomorrow with, according to the head comissaire, "a Severe time penalty."

In the results they have him 13 minutes down on the GC. I'm excited to see what type of time he can make up. Brian will not give up.......he'll fight all the way to the last mile.

Shout out to Bill Wykoff.
Posted by Shaun Radley at 8:10 AM No comments: Links to this post 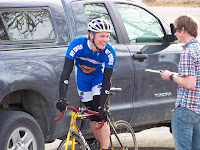 In last night's prologue Brian was 45th overall, 25 seconds back of winner Paul Mach. However, he finished third in the cat 2's, 5 seconds back. An excellent start to the event.
Posted by Shaun Radley at 8:19 AM No comments: Links to this post 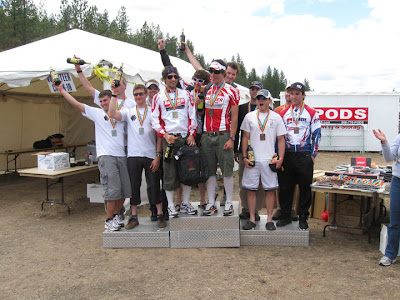 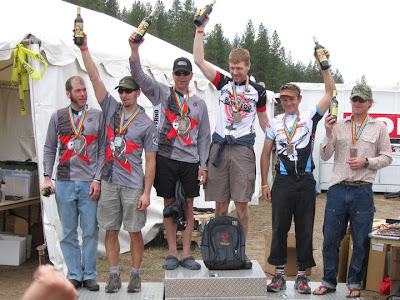 Muleterro goes 1-2 in the two man. Sten and Martini followed by Rich and EHorn. GNC's Howard and partner take 3rd.

Posted by Shaun Radley at 7:14 AM No comments: Links to this post