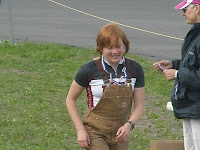 Congratulations to Lindsy Campbell for a great ride in the D2 road race. Next up is the criterium.
Great job Lindsy. You represent UM and the Montana Cycling Scene with class.
Posted by Shaun Radley at 9:50 AM 1 comment: Links to this post 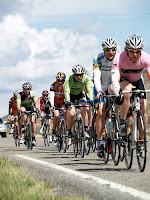 The Belt Omnium is this Saturday. Dean Hatch and crew are promoting this Montana Tradition. Belt always delivers great racing. Winds, hills, and good racing. I expect a big turnout.
My finger is still recovering and I haven't gotten much time in with the bike or the wife......so I'm on the fence. I always get on Elliot's case for not racing when he's not "in form" so I feel a bit hippo-critical.
Me going is besides the point. Everyone should go!!!!!!!!!!!!!!!!!!!!!!!!!!!!!!!!! It's a great race and it supports the juniors.
I'm scared of a full GAS lineup.......
Posted by Shaun Radley at 9:01 PM 1 comment: Links to this post 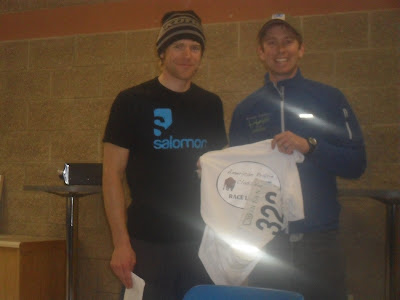 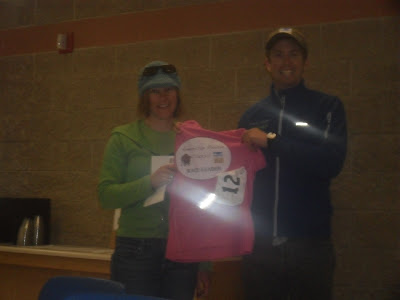 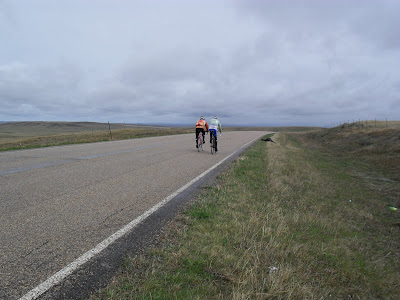 Josh Tack and Alex Lussier on an all day breakaway during stage 3
The first annual American Prairie Classic is in the books.
It's hard to explain the dramatics of the weekend to people who weren't there. Think of the Eden Road Race in 2007 combined with a 35 degree Paris Roubaix.
Before stage 1 Lisa Curry came up to me and said "this is going be a character building weekend." She was right. All three stages were between the temperature of 34 and 46. The wind was always 10-30 mph out of the NW. Snow, sleet, rain, and cold extremities were the name of the game.
I have a lot I could write about, but I'll try to sum up my thoughts in a couple sentences. The people who rode this weekend are amazing. Tough, tough, and tougher.
RACE REPORT:
Men 1,2,3
We started with 12 cat 1,2,3's. Dan Vesecheck won the prologue by a small margin over
Seeley and Brian. Stage 2 was marked by echelons and Jared Nelson's 33 mile solo breakaway. Just before the 8 mile, hilly finale Jared was caught by race favorites Dan, Seeley, Brian, and Curry. The finale 8 miles were epic. Just before the corner Curry broke and put his head down for good. Brian and Seeley worked hard to chase with Jared and Dan a bit farther back. It was classics style racing. Groups of 2's and 3's all over the road. John came in 1st and snatched the leader's jersey from Dan. Brian was next 55s back, then Seeley a little bit after that. Phil Grove came in after his teammate DPhillips to retain his cat 3 overall lead. Heading into the Queen stage Curry had a solid minute lead over Brian and Seeley. Basically from the gun Tack and Lussier started their all day escapade. The two hard-men traveled through 65 miles of sleet, wind, and MT prairie. The gap ballooned to 5 minutes at one point, but what was left of the peleton nailed it back to a minute by the line. Tack led out the sprint through a tricky corner and Lussier came around to win by half a wheel. Great action. Jared won the bunch sprint for third and the final GC was settled. John Curry, Brian Williams, and Matt Seeley. Phil did a great job to work and hang with main peleton and seal his overall cat 3 victory.
Men 4/5, Masters, Women
The opening prologues were taken by Joshua Phillips, Matt Lavin, and Tamara Bessette. The one thing these three leaders had in common was that they had no teammates. It made for an interesting stage 2. In the 4/5 race GAS flexed it's muscle. JesseV, DavidE, and Dylan all put in digs. In the end strongman Rob Newsome benefited and took a great stage 1 victory and GC lead. In the masters Chad Elkin made a nice move to win the stage and snatch the jersey from Matt. Tamara out-lasted Anna, AmyC, and Lisa to win and maintain her lead. The first gal across the line was cat 4, Sarah. Very impressive. With GAS still out of the jersey in the 4/5's and lots of cards to play, stage 3 was going to be wild. They attacked, and DavidE played his card at the right time to win the stage. Dylan flew in next as the clock still ticked, waiting for Rob. He only lost 1 minute and retained his overall lead. The masters were all separated by less then a minute. Gary H made a brave solo move in the finale to win stage 3 and jump into 2nd in the GC. Chad Elkin retained his overall lead, and 3rd was Matt Lavin. The only ladies to finish Sundays sufferfest were Amy C, Lisa Curry, and Sarah. This gave Lisa the overall title, moved Amy up to 2nd.
Results will be posted on www.montanacycling.net by the next couple days. Look for more race photos by the end of the day.
Posted by Shaun Radley at 9:11 AM No comments: Links to this post