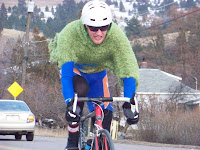 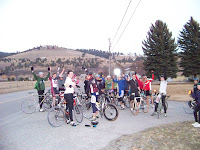 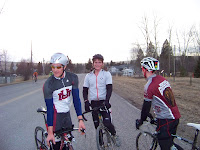 25 riders showed up to the first TTTT of the year.
RESULTS
PHOTOS by Tamara
Johnny "Montana" Fitzgerald proved that all the freezing rides are starting to pay off. I've seen John and Jesse Agner ride past my house in some nasty conditions. Let's compare this UM triathlete's time to some recent history. Last year the winning time for round #1 was 12:08. John's round #1 time from last year was 13:23. John's best time last year was 12:23. It was right before the Grizzly Triathlon. Today Johnny put up a blistering 12:17. Things are looking good this season for Johnny Montana and the UM Tri Team.
The top 5 was rather surprising. For me it was the first time I'd seen many of these riders in many months. It was great to see old friends and meet some new up and comers. 2nd place was James with an impressive 12:52. That performance earned him the UM PERFORMANCE of the DAY. 3rd was Bad Bryce with a 13:05. The house rivalry is brewing nicely, as 4th place was defending champ Matty Ice, 13:18. Rounding out the top 5 was Matt H. 13:22.
The ladies top 3 had some familiar names. Taking the victory in impressive fashion was Kellie Corim with 14:42. Kellie's round #1 last year was 15:01. The winning round #1 last year was 14:49. Excellent work from the nordic skier now cyclist. 2nd place was UM Triathlons Nicole with a 15:05. 3rd place was Ms. Ivy with a 15:08.
The UM Challenge was a route. Without the help of the UM ladies the cycling team would have pulled a goose egg. Tack and Agner were both gone for UM cycling and the tri folks made the most of it. John, James, Matt H., and Ice took over. 6 to 2 UM Tri.
Posted by Shaun Radley at 8:19 PM 6 comments: Links to this post 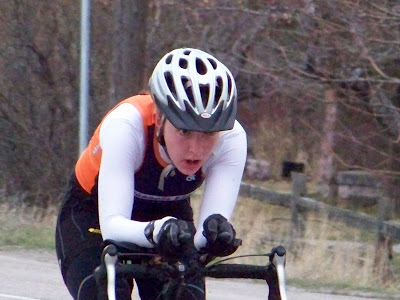 After a one year hiatus with TWTT we're back with the original TTTT.

Every Tuesday for 5 weeks starting tomorrow.
*5:30pm First Rider is off
*Out and back course, 4ish miles
*No dropping of scores this year, all five count towards the overall
*World Champs & Top Griz will be handed out every week

What times were you putting out last year? Click here

New for 2010:
UM Cycling vs. UM Triathlon Challenge
Rules: Every week the top times from each team go head to head. For example the #1 time for UM Cycling vs. the #1 time for UM Triathlon. #2 vs #2, and so on till the #4 time. Also, included in the team scores are the top two female times and the top 2 alumni times. So, in total 8 people each week make up a team. You get 1 point per win. Total points at the end of 5 weeks wins. Remember Pizza Parties?? Slamming down soda, playing arcade games, and stuffing your face with desert pizza. Winner of the UM Challenge gets a homemade pizza party w/beer, put on by the losing team and mtcx.com. If your a double dipper (for example: Wes, Josh, John, Lacy, Jesse, ect) race for the team you will be participating with the most in 2010. Alumni have to have raced for UM Cycling or UM Tri.
Posted by Shaun Radley at 8:43 AM No comments: Links to this post