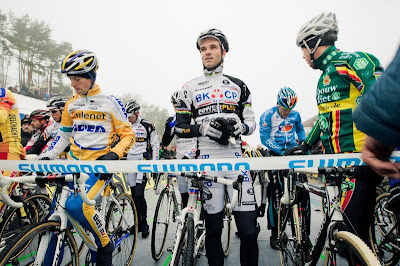 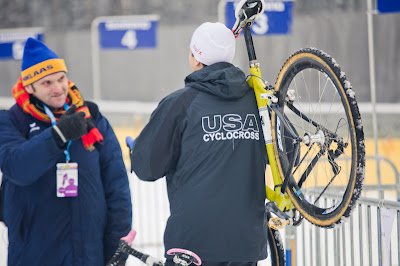 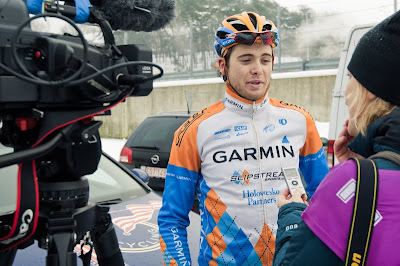 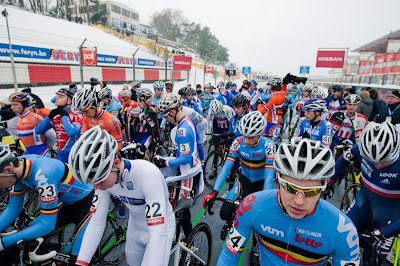 The second World Cup for me was in Zolder. At least I think Zolder is a town, for sure it's an F1 Speedway. The other things that I know off the top of my head about it is that it hosts a lot of World Cup cross races, and a couple of years ago it hosted the World Championships in Cyclocross and there were 60,000 spectators. I don't think their were that many this year, but there were a lot. At one point, I think a quarter of them were in the beer tent. In fact, an hour after the race was over, I think all those folks were still in the beer tent singing Neil Diamond's "Sweet Caroline".

Zolder, like the rest of the races I've shot here, was snowy. And not only snowy, but compact, slick snow. This led to a lot of crashes...both for the racers, and for the people walking around. The car I was traveling in had to get pushed out of places a couple of times. But the more beer the Belgians drink, the more they want to help you push your car.

If you poke around on the internet, you might be able to find some highlights of the race. And those highlights will most likely be one crash after another. The whole race was a crash....just amazing. For the Americans, Danny Summerhill was the top placed racer in any of the racers (as far as the Euro Cross Campers go... Katie Compton crushed the women's field. I mean crushed it). Danny was hovering around the top 10 and crashed 3 times alone on the last lap. He finished 13th.

I'll look for a video to post soon. I just threw up a link to the photos from the race. There's also a link to the race from Diegem last night. I really want to write more about that, and will in the next day or two. I've been going to sporting events since I was two (that's what happen when you grow up where I did...you start with college football pretty early). I've been to all sorts of pro and college sporting events.... World Series games, National Championship games, Major golf and tennis events, a World Cup Soccer event, and the last two weeks of the 2004 Tour de France. But last night's cyclocross race through the streets of Diegem topped them all. It ended with me shooting the podium, and Neils Albert's fans right behind me singing at the top of their lungs (He won). That was right after he had cross the finish line where there must have been 2,000 people banging on the barriers. I'm getting chills just thinking about it. (Shaun.....Rolling Thunder needs barriers for folks to bang on).

But more about that later. There's an early wake up call for a race tomorrow.
Posted by tom at 12:25 PM