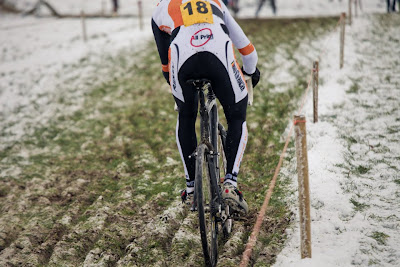 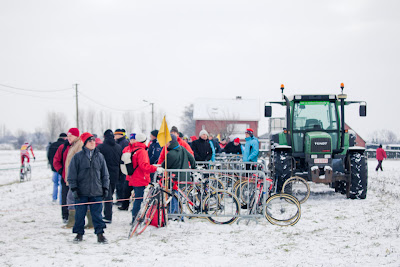 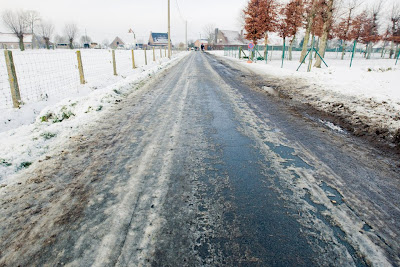 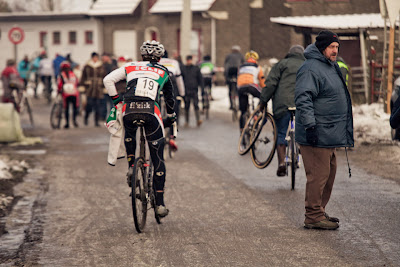 The first race of the Euro Cross Camp was a small local race, a “B” race in Belgium, in the town of Lichtervelde. A couple of exits up the road from the USA house in Izegem, the race was held on, by all accounts, a cow pasture. A few things stood out to me about the race, first off, there is an entry fee of 5 Euros for everyone but racers...even the mechanics. Looking at the course and surrounds, it didn’t seem like it was that much different than racing at Fort Missoula on Wednesday nights, but upon closer inspection, it had everything the big races had. A warm room to change in; a snack trailer that sold frites, brats and the such; an ambulance and emergency personnel on site; crowd control; a podium; two separate pits, and an announcer.

The level of support here for cross racing is really impressive. I expected it at the larger races, but it seems to be case at the smaller ones as well. There was a Masters races going when I pulled up, but I hung out with the USA juniors as they warmed up. The staff of the Camp certainly does provide pro-level support for the campers. A tent was set up to ride trainers to warm up in, bikes were being tuned, numbers were pinned onto the riders as they spun on the trainers, and finally the mechanics took spare bikes and wheels to the pit area.

While the care for the campers is somewhat expected, all of the Belgium racers had their own support, which looked to be made up mostly of family members. From gathering warm-up jackets at the start, to washing bikes in the pit, all of the racers at this local “B” racer were kitted out and fully supported.

I have heard Geoff talk about how Belgium cross courses were dangerous “back in the day”, but that things were a lot different now. This course was flat, with no barriers, and one run-up that could be ridden with some momentum, making it seem pretty boring. But it turned out to be one of the sketchiest courses that I had ever seen. What made it so sketchy to me was that it had ruts that were 3” to 4” deep, and completely frozen solid. I don’t know if it had been ridden during the week when it was damp and then frozen or what, but it was as hard as concrete. When riders crashed to the ground (and they did), it looked like it really hurt (it did). One Belgium Junior rider landed on his face, breaking his nose. By the end the last race of the day I saw racers shouldering their bikes and running through the worst part of the ruts. Seemed like the right thing to do.

Most of the racers from the camp pulled out at some point. This was part of the plan, as there was an early departure time the next day, and a World Cup race to be ridden. The day served as a nice little introduction to some of the campers (and the photographer) to racing in Belgium.

photos by: tomrobertsonphoto.com
Posted by tom at 2:23 PM