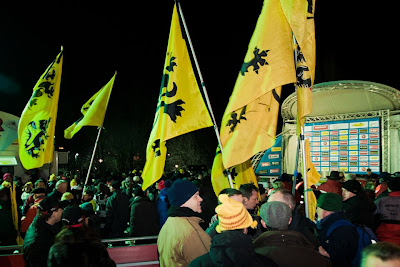 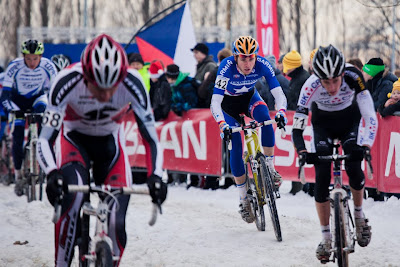 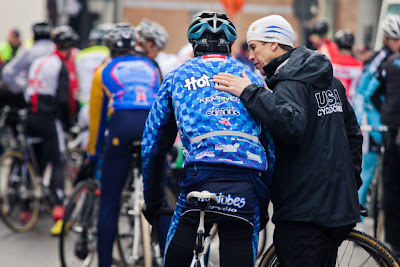 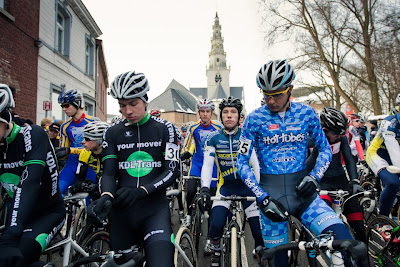 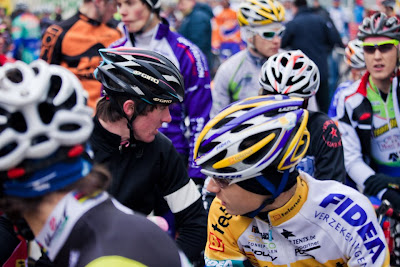 Diegem held a Superprestige race on Monday under the lights. And if you read the snippit from my last post, it was frickin' awesome.

Superprestige is a season series consiting of around 10 races in Belgium and the Netherlands. It's one of three season. The Superprestige is organized by the trade teams, as opposed to the national teams like the World Cup. I also learned that night that the Superprestige race has its' own soundtrack.

The Junior race went off first, and immediately it started splitting up. Yannick Eckmann, a German rider who lives in Boulder, CO and is part of the camp, was towards the front. He's a strong rider who's currently in the top 5 in UCI points. He was steadily in the 10 all day, but had crashed in Zolder the day before and had a sore knee. He did end up finishing 10th. The other groups of camp riders were scattered throughout the rest of the standings, but meeting them at the finish line they were all pumped. Andrew Dillman, a Junior racer who's been the top American for a few races, dropped his chain on the third corner after the start. He slowly started picking off riders during the race, but got the most joy out of bunny hopping the barriers. He hopped them one lap and got big cheers. He didn't hop them the next lap and got some jeers. So the last lap he hopped them again and it was a celebration.

The other thing that stood out about the Junior race was watching Geoff Proctor engage with the officials about making sure the American riders got their proper call-ups. It seems to me that at the World Cup that they go strictly by the book, but at this race it seemed a little more lax. At one point, Bjorn Fox looked like he wasn't getting called up so Geoff just sent him up anyway. Nobody said anything. Geoff really does so much on race day...including making sure these riders get what's coming to them.

It was like that all day. The barriers were up by the beer tent, so perhaps that was part of the energy on that part of the course. One of the interesting things about the crowd, especially with the elite race, is that the roars are huge for the front group. But the farther it gets back in the crowds, the quieter it gets. It can be an odd thing, with the crowd just staring at the riders and not making noise. Ryan Iddings, an elite racer, described it in his blog post for cyclingnews.com....saying that you can hear the crickets chirping. Not that there are crickets out there...but you get it. Right?

The crowd was large. I searched the internet for numbers, but was unsuccesful in finding a number. I'd say 20,000+ thousand. Maybe that's high, and maybe it's low....maybe that's why I settled on that number.

All of the top riders have huge fan clubs. Supporters if you will, that carry large banners and flags, and wear jackets that show their affiliation. They can be somewhat aggressive about it as well. At the podium presentation after Neils Albert won, his supporters were right behind me signing at the top of their lungs. Waving flags, screaming for me to take their photo, and cheering loudly when he stepped onto the top step of the podium.

Speaking of taking photos, I got more request at Diegem to take photos of fans than any other race so far. It usually starts with a couple of folks saying something to me in Flemish. I say "English" and then they smile. Most start talking in English, but some can't. Whatever the case, I get the gist of it. They then put their arm around their buddy and smile big for the camera.

The best way I can describe Diegem is what I said earlier, Rolling Thunder times 1,000....maybe more. It's just a huge party with a bike race going through it. The screams, the flags, the banging on the barriers and the singing.

For some photos and a short article on I wrote for Cyclocross Magazine you can go here. And to view additional photos, you can visit here.
Posted by tom at 1:04 PM

Thanks for note! I was hoping folks were reading all of those words.