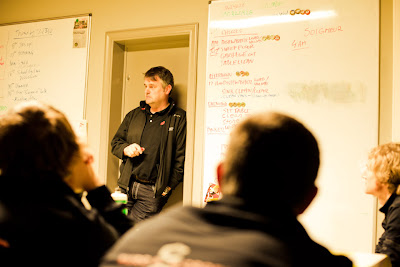 One of the undocumented parts of the Euro Cross Camp from my perspective, is what goes on behind the scenes in getting the campers ready to race in Europe. While racing, training and preparation are part of most daily activities, there are daily seminars and discussions that take place in the House. I've been fortunate to be able to attend a couple, one by a sports psychologist who discussed the mental aspects of getting ready to race. The other was last night given by a Pro Tour soigneur, Chris De Vos, aka "Fox". Fox is a full-time sogineur with a pro team. A Belgium, he has served as a part-time sogineur with various teams over the past 15 years, including the US National Team and US Postal/Discovery.

Being full-time is a big deal. Fox just "retired" from his other job as a truck driver, just this week. You might think that's cool, now he only has one job. But during the course of what it takes to be a full-time sogineur, I have to wonder how the hell he had time to do anything else. He gave a brief outline of the duties of the job, including being on the road for 225+ days a year, and the working hours during a Grand Tour that start at 4:00 AM and go until midnight, for four weeks. It's jaw-dropping the time commitment that it takes to work with the biggest teams in professional cycling.

Fox shared obscure details of the operations of a pro tour team, one of which is how many bottles they prepare for a single day during a Grand Tour stage (300 to 350 for an 8-person team). Side note...not all of them are consumed during the stage. While some are used to cool riders off during the stage, others are used just for the "sling." Because riders can't hang on to cars, when the get a "bottle sling", the generally discard the bottle soon after. Another interesting fact about the bottles, none of them are ever re-used. The risk is too high for contamination.

One of the most unique aspects I found of the sogineur is that they are part-time tour guide, part-time masseuse, part-time driver and part-time therapist. While they might not be able to always give advice or insight like a therapist, they listen to it all...most of the time during while giving a post race massage.

And finally, the one eye opener for me of his talk was about the yellow bus in Belgium. I believe I will get this right. There is a little yellow bus that drives around Belgium that randomly stops riders to check their papers, and the occasional drug testing. It doesn't matter if you are a pro racer or amateur. If you are kitted out and spinning around on your bike, you better have ID and your biological passport. If not, they take you downtown.

Today we are taking a field trip to the Tour of Flanders Museum. On the way, I'm going to keep an eye out for the little yellow bus. I'll let you know if I find it.
---
Note: Here's a link to a group of images on Cyclocross Magazine
Posted by tom at 12:49 AM