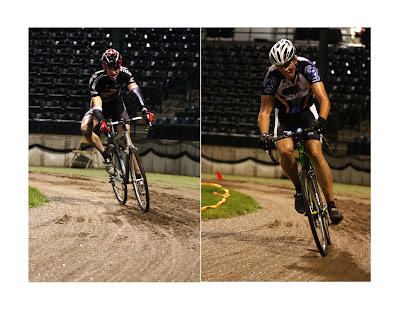 It was the second year of Rolling Thunder and Clint "The Lung" Muhlfeld was all but a legend in my mind. After he almost lapped the entire field in 2006 I thought he would make quick work of the field in 2007. Little did he know his protege Doug Dale Shryock not only had a home-field advantage, but a fire like never before.

Doug is not big on pre-planning, but he his big on getting the job done. As is the case now Doug moved lights around the course, handled the beer garden, and kept things in check. I don't think he ate anything the day of the race. He was flying around trying to keep me calm.

Once the race started Clint easily jumped out of the bunch. Pipo gone, Toby gone, Franky gone. The only rider left on the wheel was Douger.

That year the crowd consisted of only 3 groups; Club Passion residents and friends of Passion, Shryocks, and Missoula Cyclocross Racers. Matty, George, Jane, and Hugh Daniels screamed at the top of their lungs for Dale. The pain on his face was hard to watch, as Doug slammed himself into the darkness of the pain cave. In the end the better racer won, but Doug was able to put himself into a place few people ever reach. Fueled on by the crowd, and his respect for Clint, Dale not only put himself in the Thunder record books, but solidified Clint as a worthy champion.

Photos by John Sieber
Posted by Shaun Radley at 10:26 AM

The stuff of legends.