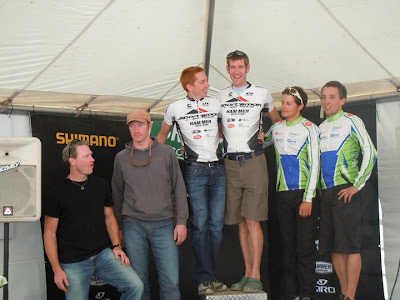 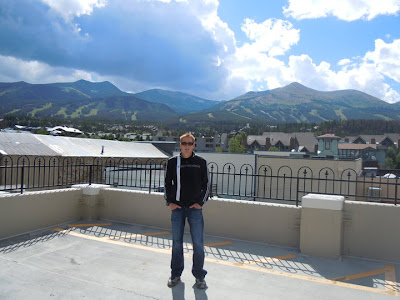 Circumnavigation of Gyot Loop was the toughest stage yet in the Breck Epic. Our thoughts running through our mind during the 4 hour race can be summarized as: "let's get this mother over with...another false summit and steep climb.....I can't feel my hands...and boy my triceps kill!"

The stage consisted of four major climbs that crossed the Continental Divide two times, topping off at 12,500 ft. Following a little pre-race cluster to fix a leaking tire, we ascended to the trails from town with a police escort. The first 8 miles was basically a brutally steep and loose gravel climb followed by a sweet descent to feed zone 1. Our legs felt great and we were riding in the top 10. Then we left the comfort of a densely wooded forest and entered the alpine zone to French Pass. The alpine trail meandered through a steep upper basin, with two hike-a-bike sections at the top. French Pass was nasty wet and cold. A rain/wet snow cloud engulfed the top of the pass and for the next 1.5 hours we got brutally weathered. Then we descended down a hairy, rocky, old stream channel, which felt like riding through a blender. Finally, we entered sunshine at the bottom and felt revived. Subsequently, we set a steady, hard pace up the next 30 minute climb before the rolly-polly, chicken head descent to the finish line.

Overall, however, we rode a strong and consistent race, putting an additional 13 minutes into the Swiss Power Team. We are having an awesome time and riding some of the best single track of our lives. The Hammer products are keeping us fully recovered and powered during the race, which has been a huge factor in our success in winning the first three stages thus far in the mens open duo.

Thanks again to our major sponsors, Hammer Nutrition and Sportsman SKi Haus, and HUGE thanks to all the support of our friends and families. Hopefully we're not boring you to death with these...