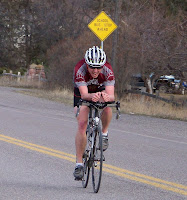 The Course: The swim was in Spring Meadow Pond. 2 laps for Oly, 1 for sprint. The bike course was an out and back featuring a relentless series of low grade climbs on the way out, enough to make you feel cruddy and slow, but not quite enough to make you throw your bike in the ditch. Luckily, the way back was mostly downhill. The run was flat around the pond: 2 laps for Oly, 1 for sprint.

Matt Handwerk killed the sprint course by laying down the fastest bike and run splits by several minutes each. He placed 1st overall. Aaron Little, Chris Cordingley, and I raced the olympic. Aaron was 2nd in our age group after a strong bike leg. He passed me looking calm and relaxed, said, “sup”, then continued to pick off racers one by one on the run. I saw him on the run. Every time we'd turn a corner he was still the same distance ahead, no matter how much more I sped up. It was both frustrating and impressive. Chris, by far the fan favorite, had a solid race considering he switched just days earlier from the sprint distance to the olympic. Also, he brought along approximately 50 fans to cheer for the team, which was awesome. I finished 3rd in our age group behind Aaron. After Wildflower, finishing was good enough for me.

In other UM Triathlon news, John Fitzgerald raced the Missoula Marathon this weekend and finished 3rd in his age group, and 16th overall. Not bad considering 6 months ago he and I talked about never wanting to run another marathon again. Now he's talking (crazy) about doing a 50 miler (gross) in August (hot).