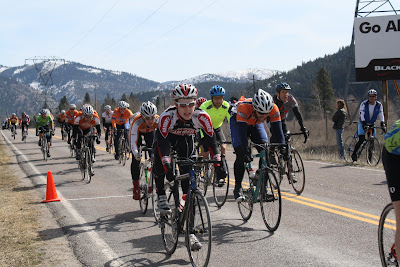 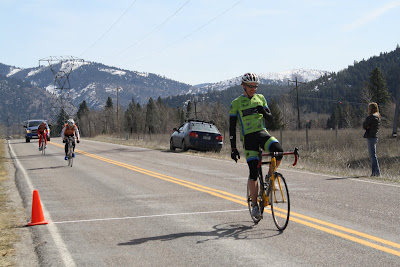 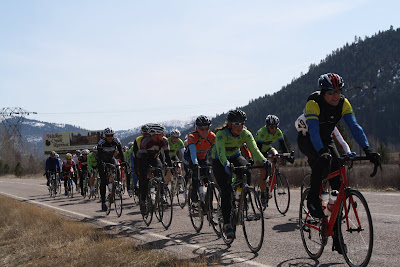 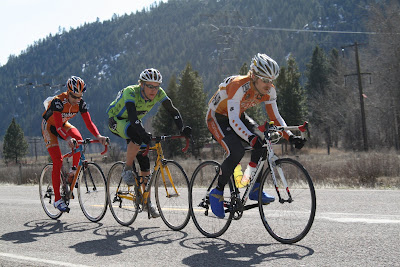 Photos by Wendy Doll
Results are in the previous post.
The start of the Montana road season has come and gone. There are only a few chances to test your form before the Roubaix. Saturday's training race was one of them.
The winning break in the A group contained Montana All Stars John Curry, Frank Gonzalez, and Brian Williams. After long cx seasons Frank and John showed why their two of the best. Brian had shown his form in the TTTT early in the week. Getting dangerously close to a course record. The break worked well and the Montana strong men held their advantage to the line.
The B group stayed together for most of the course. Cameron Johnson and GAS riders Armstrong, Vernon, and Curry were the most active. Johnson attacked hard mid race but the head wind and lack of cooperation foiled his chances. In the end a bunch finish was meant to be. Proving his sprinting potential Joshua Phillips took the gallop to the line. Shout out to Corbin, Zickovich, Dingman, Curry, and Halvorson for hanging tough in the B's. I love Montana strong-women!
The C group was won by Ed Hirsch. 2nd was newcomer Jason Hardling. The group broke up and Ed made the right moves. Thanks to our chaperons John Wehyrich and Joey Lenaburg.
Posted by Shaun Radley at 8:46 AM

A big day for Montana Cycling: A return to form for Frank G. of MTVelo! Great to see things come together for such a passionate rider.