Lisa continues her break-out season with a 9th place at Jingle Cross.
Posted by Shaun Radley at 7:14 PM No comments:

Usually, this time of year is reserved for early nordic adventures, ski touring, and hot drinks.

With Cyclocross Nationals being in Bend, OR I figured I had to go. Knowing myself I thought racing motivation would be gone and the trip would be "one more race," filled with drinking beer and catching up with friends.
I was wrong. Since the Helena Cyclocross race I have been obsessed. Each week I become more focused on the race. I love racing and riding bikes, but never before have I been so motivated on one event. I've watched the course video a dozen times. I look at the registered rider list every other day. Everyone I talk to I pick their brain on training and equipment. What started as a half hazard fun time, has turned into a personal vision quest.
Why? I don't really know. Some things just strike a cord with people. Maybe it's because Montana is a small cross market and nationals is the closest thing to a scene vs. scene rivalry. Whatever the reason, I'm motivated and ready to rep MT at Nationals.
I may not come home with the podium but I will be giving it all I got repping the Rolling Thunder Crew, Team MTcx.com, and most importantly Cyclocross in Montana.
Stay tuned as I get some other MT racers opinions on the up coming races.
Everybody's Working for the Weekend....
Posted by Shaun Radley at 6:30 PM No comments: 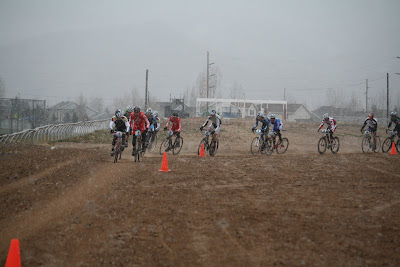 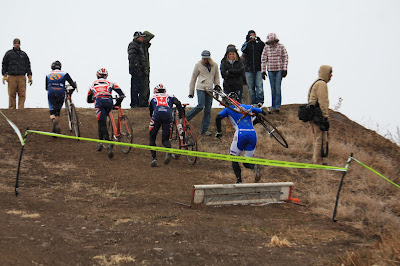 Jessie Doll stormed onto the cyclcocross scene. Last year in the 4's he was consistently in the top 5. While JDoll was a solid rider, not many people could have predicted the success he's having this year. Hard work, a passion for the sport, and a gritty attitude have taken Doll to the next level. Top results include a 7th at the state championship, 8th at Greased Lightning, and 5th overall in the MT series. Not a bad sophomore season :). Look for JDoll to be ripping legs in Bend...
Very interesting weekend...planned on doing both Saturday and Sunday, but Saturday's race was less than stellar with 2 flats (front and rear) and a nice introduction to Utah's goat head thorns. I was able to talk to some people afterwords and EVERYBODY runs Stans sealant in their tires regardless if they are tubular or clinchers. I pulled out 5 thorns on my rear wheel and 3 thorns in my front wheel, great way to ruin a pair for tires. So needless to say I chased all day and was able to stay on the lead lap. Bart Gillespie and Alex Grant both top 5ish at La Ruta de los Conquistodores a few weeks ago and Ali Goulet the leader of the USGP cycloross 35+ series and I think he was top 10 at elite nationals last year. Would have been easy to be intimated for sure.

-Jesse
Posted by Shaun Radley at 8:44 AM No comments:

The Polson Crew is on fire. The Seeleys, Campbells, 5VV riders and Volunteers did an excellent job making the Polson Cyclocross race a huge success. A great course complete with the "British Open" feel. High winds, cold temps, and beautiful Ireland like scenery. Special features included a Cross and Tie Race (one bike two people), First Timers Race, and post race feast! If Matt and 5VV are willing

I think Polson CX will be a long lasting event.

Racing
I didn't envy the first racers of the day. The wind was blowing and the sun had yet to shine. The ladies race was highlighted by the Zickovich Ladies and Campbell. Campbell was fueled by performing in front of a home town crowd and took the victory. Julie Z looked strong in second and never gave up to much ground to LC.

Nice racing in the men's 4 race. Four super strong 4's duked it out. Strongman Brent Ruby came up with the victory. He was never able to let up, because Great Divide rider Mark Brooks was constantly charging in 2nd. Also of note was third place John Bardsley on the mtb. 4th place Erik Horn was killing the technical sections of the course including riding up the run-up.

Masters B was won by Pat Scharfe who was right in the middle of the men's 4 battle.

The men's 1,2,3 race was scored separately. The men 3 hadn't gotten face time since Greased Lightning. In a much anticipated battle Alex G and Bob Presta didn't disappoint. Alex came out on top. His form is starting to peak towards nationals......very impressive. Bob did all he could including ri

ding the run-up and a big last lap charge that put him a bike length behind at the line. Riding great in 3rd was Tim Noonan. 4th was promoter Seeley. The cat 3 race was hot. I loved racing for a place. Bob was obviously out of reach, so it came down to a battle for 2nd. Mtcx Videographer Dan Pierce was a good pick for 2nd, as was Connelly, Flathead Russ, and JMills. After a crazy first couple laps the dust settled and I had major flashbacks of Missoula #5. Me ridin

g with Tack and Fiore. Our different skills complement eachother. Tack in off season form, Fiore the consistent technical master, and myself putting in surges. With two teammates I was super fortunate to hold off the Brown Bear Pierce, Cman, and Flathead Russ. Tack and Fiore didn't know about the cat 3 pack challenge........but I sure did. I took 2nd and 3rd was Brown Bear Pierce. Two teammates on a super windy course was super lucky.

Great racing in the masters A. The perennial master A killer Chance Cooke was racing....and he was flying. He took the win. A hot battle for 2nd settled into John W, followed by Gaertner, and Cochran. The masters A look prepared for a hot showing at nationals. I only know of a couple masters attending, but really the full MT fleet should go. WOW, we have fast masters. Shout out to Flathead Cycling who had the biggest squad there (Noonie, Cooke, Gaertner, Greenburg, Muller, and Russ).

Photos by Pat Scharfe
Posted by Shaun Radley at 9:03 AM No comments: