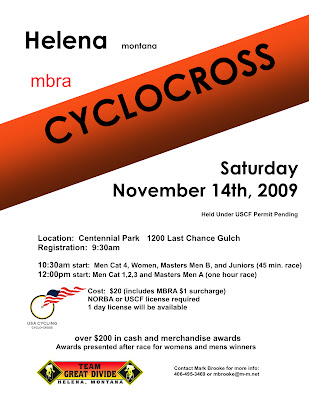 Posted by Shaun Radley at 4:41 PM No comments: Links to this post

Steve and the Flathead crew put on a great state championship. The Herron Park course was similar to years passed. The sharp right hander into the optional run/ride was out this year. In years past the run up near the start/finish was not ridable. This year several men's 1,2,3 rode it every lap.

Karl took the hole shot and opened up a couple bike lengths on the road climb. A resurgent Clint Muhlfeld clawed onto the Velo rider's wheel. Bob joined Muhly and KV and the battle began. Karl used one of the best tactics in cyclocross. He rode hard off the front and tried to break his companions spirits. The tactic (some would call this racing) worked beautifully and the stronger rider took the gold. That left Clint and Bob to fight it out for 2nd and 3rd. Despite great racing from Clint......Bob had Roman there and that usually means a good result for Presta. Great battling throughout the course. The men in black (Matty B and Parsons) teamed up on JDoll. MT Velo (Frank and Scott) took turns putting Pipo in the chamber. Hard men Ali G and Brad did what they did best and rode incredibly hard for 60 minutes. Brad took 4th and Alex was right in the mix. Great turnout in the men's race.

The masters raced with the 1,2,3's. I could provide a full race report for this one.......I was right in the thick of most of these battles. Chance Cooke once again held it down for the Flathead. It was my first opportunity to be on course with Chance. He passed me like I was standing still. John Fiore took second in the masters riding solo for most of the race. After that was a 3-way battle between JW, Gaertner, and Greenburg. Great tactical racing between the Greenies and JW.

-Prodigy one her first of what should be many state championships.

-Cameron Johnson pulled a Karl and rode from the front until his competitors couldn't take it anymore. He takes home his first state championship and looks forward to racing with the 1,2,3's.

-Master's B saw the Nallick/Scharfe battle continue. I did not see who took it.

-Flathead has strong cyclocross riders (Flathead Russ, Reid, Dr. J, Greenburg, Noonan, Gaertner, Muhly...where you guys been??? We miss you)
Posted by Shaun Radley at 8:40 AM No comments: Links to this post