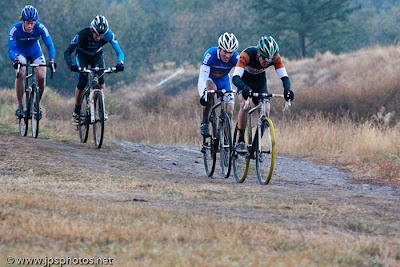 Go Kipper! Emily Kipp rides a strong race on her Kona Mountain Bike. Karl came down from Helena. Lot's of group riding last night. A big group massed at the front of the race. Karl, Bob, Owen, Toby, and Sam all took to the front. The second half of the race got slimmed down to Bob, Karl, and Sam. S.S. looked good for Thunder and took the victory. It was awesome to have KV down for the evening. The men's B race was also dominated by a strong group. Dillon and Beltz were on the front controlling affairs. Chris C. gets the award for best dressed. 3 weeks in a row he's rocked the mysterious pink cutoff. He's even got Goldberg doing it now.

Toby laid down an excellent course last night. One of the best I've ridden at the fort. Shout out to John Sieber who delivered another gem of an album front last night. Click here. 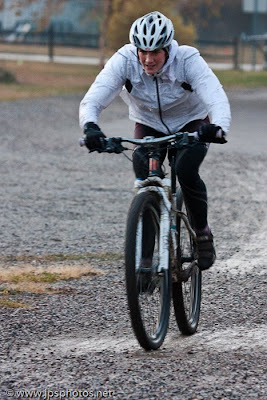 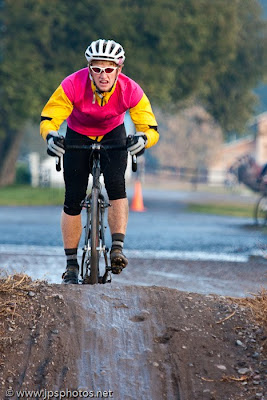 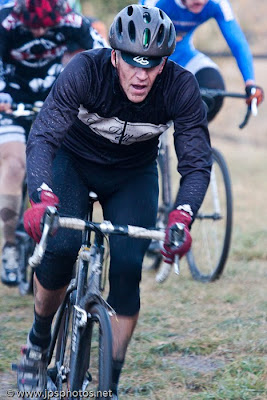 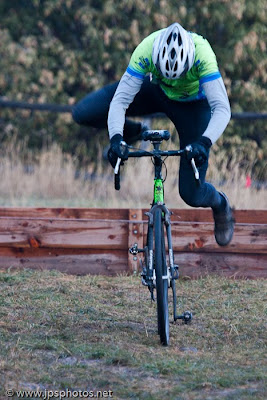 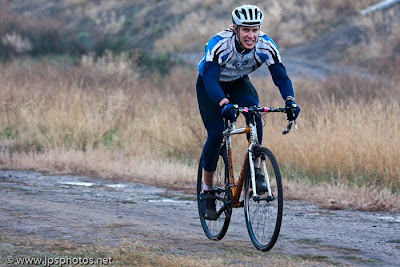 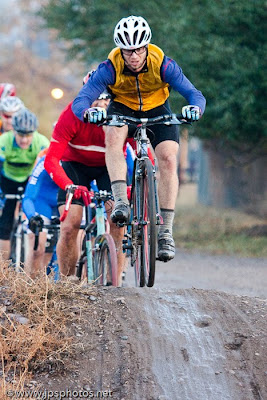 Posted by Shaun Radley at 10:20 AM No comments: Links to this post

Phil Grove went down to Moab this past weekend to compete in 24 Hours of Moab. Here is his race report.

that an up and coming sport director can pull off the man strength required to also ride his own team onto the podium, let alone the second step at a national championship. But thats what my boy Dustin from Hammer Nutrition did this weekend at the 24 hours of Moab. For those that don't know D, he used to represent MT at world cups in the glory days of our beloved sport. Now he runs sponsorship at Hammer, has a beautiful young family and gets out on a ride every blue moon or two. Yet somehow with his full schedule of dad, director and part time bandit, he still hasn't lost that little something old guys never lose: Man Strength. It's that certain something that Brent Ruby's lab can't even explain. In short, he's been in enough fights to know how to throw down even when he knows he doesn't have the firepower.
While he knew he didn't have his cup legs from the 90's, he did know one thing, him and his Hammer team went to Moab with only one thing on their mind: Ripping Legs off. And that is exactly what we did. Running four man at a 24 hour race is kinda like running 500cc at a motocross event; while everyone else needs to conserve, four man champ class runs at full gas round the clock til there's nothin' left but chewed up rocks and slain challengers.
Anyway, enough primer, on to the race report. Ben Parson was selected as our le mans style start man due to his big lungs and sharp elbows. After the famed run around the juniper bush and back, Ben was third out the bike parking and out on course! He turned in a super solid first lap riding somewhat within his means. Some of the guys really opened it up on lap 1. Moto GP racer Ben Bostrom rolled a 59 something to my best of 1:03:19, wow i suck at biking;( Amazingly, after 7 and a half hours of racing, we found ourselves tied, yes tied for the overall, with a team called Pro Cycling. They were a super legit crew that deserved the win for sure. They were Ice cold with no mistakes over 24. The night laps were an amazing experience, like nothing I've ever done on a bike. The darkness however was not our friend and dawn found us 30 minutes behind Pro Cycling and Trek/Honey Stinger only 3 minutes behind attempting to take 2nd from us. To make matters worse, one of their riders, Max Taam, was completely fresh after recovering from an earlier swollen eye. I was set to go out on my fifth lap with no sleep and maybe a couple minute head start on Max. At this point, Some father figure from trek/stinger, "Max is gonna chase you down" As usual, I smiled and said maybe, but this was not the answer I gave my to myself in my own head. I thought to myself, who in the !~@$@#@ does this guy think he is? Can he see me? Can he see my white shoes and my Cannondale 29 with green-fade to black flames crawling up from my XTR cranks? Do I look like the type of goon that gets chased down with 2nd on the line? I was offended and seething with anger. I could barely control myself. And then Parsons gave me the baton, I blacked out. Rage. Throttle broken off past full. Eyes on the prize with no peripheral vision. I don't remember that lap, just taking 30 seconds from their rider and passing the baton to Matty B who inherited my fire. He too rode like the devil had possessed him, easily putting probably the best day two lap of anyone still on course! At that point we knew we had it, gifting Parsons a 10:50 lead into the last lap. Ben rode safe and got us home in time for second. We were stoked, top step would have been so much sweeter but we learned a lot and we will return next year for redemption.
Super props to Dustin, Brian Frank and Hammer Nutrition, et al, for sending us to an amazing event that we couldn't have done on our own. We did our best to fly the colors with pride and I'm pretty sure everyone knew we meant business. Hopefully 2-10 will find us on the top step!
Pippo
Desert Ripper
Posted by Shaun Radley at 8:35 AM No comments: Links to this post

Janice Fontaine is the Director of the Missoula County Boys and Girls Club. This year Rolling Thunder has teamed up with the Boys and Girls Club. All proceeds from the event will be donated to B & G's after school program. Janice was kind enough to write a short piece on the program and where your money will be used. Just $20 provides a child a week of after school activities!

The Boys and Girls Club of Missoula County After School program serves over 100 children each afternoon at four program locations. As part of a network of more than 4,000 youth centers across the United Statesand the world, the Club serves at-risk youth within Missoula County. Although the Club serves many low and very low-income families, a large part of our constituency are middle-income families whose resources are stretched. These families, the “working poor” of our community, are in need of our services, as they are not eligible for other assistance programs. The Club’s programs are working to fill this need by providing affordable quality after-school, summer and evening programming for youth in our community. Our programs strengthen families by providing positive, fun and secure places for children and teens to socialize, recreate and learn during at-risk hours. We strive to provide the best service and programming options that we can to our members and their families. We are the lowest priced after school option in the county, and we are also the best after school option in the county. However, we are in need of financial help to keep our programs operation and growing. Each donation of $5.00 gives a child a wonderful safe afternoon in one of our after school programs. A donation of $20.00 will provide a week of fun and educational activities in a safe and positive place. $100.00 will provide a month of exceptional out of school learning and fun for a child who would otherwise go home alone to an empty house.
Thank you so much for you support. The Boys & Girls Club of Missoula
County, the Positive Place for Kids and Teens!


Janis Fontaine
Executive Director
MIssoula Boys & Girls Club
406-542-3116
Posted by Shaun Radley at 8:18 AM No comments: Links to this post 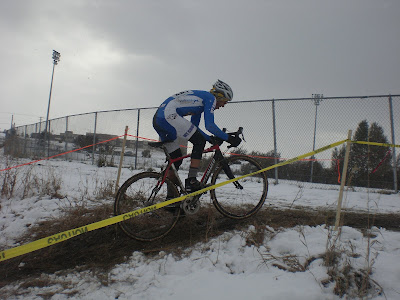 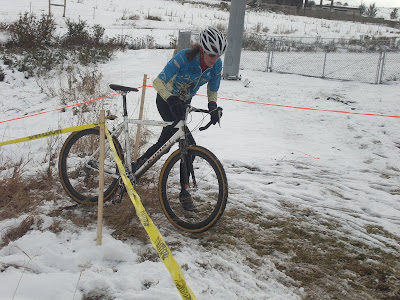 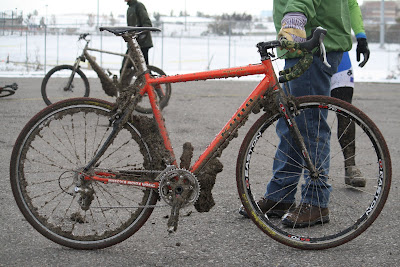 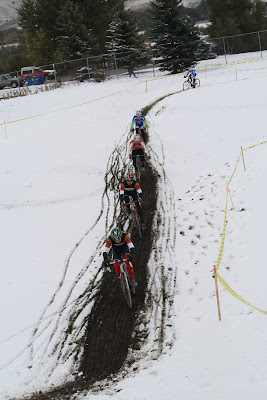 Posted by Shaun Radley at 9:16 AM No comments: Links to this post

Jesse Doll sent a little report last night from the race on Saturday.

AM temperature were in the low teens and not looking like things were going to warm up. Serious snow had blanked the Bozman area as well as cold temperatures. I was quite surprised by the number of folks that turned out despite the conditions. MSU cross was shaping up to be a fine day by the looks of it. The course had a great flow to it. Elevation, single track, short punchy climbs, tons of slop and snow! The Ladies race was won by Amy Fryckman, who took second overall in the mens 4 race, and the 4's was won by I think a guy from Victor, ID. The usually suspects turned out for the 1,2,3 with Curry taking the hole shot and never looking back. Pedal choice played a huge factor with the snow, freezing ice, and mud. 2nd was Fryckman, 3rd Morgan, 4th Vanderwood, 5th Frank, 6th JD and 9th Fiore. Great day for sure...looking forward to tomorrow!

-JD
Posted by Shaun Radley at 9:22 AM No comments: Links to this post