Last night the stars were aligned.

After two years of waiting it finally happened. Almost every Missoula endurance athlete raced last night at Fort Missoula. I knew the turnout this year would be bigger with the return of Jeffro, Halp, and Toby. However, only a bike nerd like me could truly appreciate last night's line up. Alex, Kiefer, Schultz, Gue, Fischer, Martin and Tack all showed up to race cross! I didn't know if I was standing at the start of the Hellgate Duathlon, Zootown Throwdown, or Rolling Thunder?!?!?!

winning any race, Tim set the course up, ran registration, and officiated?!?! Are you kidding me. Next time you see him give him a Double Haul!

The men's A race was dominated by a group of 3 riders who got a way early. Bob, Toby, and Sam rode together till the last lap. Sam put in an acceleration that couldn't be matched. Toby snatched second and Bob was third. After them came Elliot and Kiefer rounding out the podium. My initial guess is that the men's A had 20 starters (could be record??)

race was huge!!! Bike handler extraordinaire Mikey Beltz was announced the winner, but I saw Johnny Hot Pants sneak in with some A's. Regardless both racers had an excellent race. Mountain Biker Dillon Johnson, and 5VV rider Greg Larsen were also on the podium.

The ladies race was won by Nicky Phear. She looked great and primed for a run at this year's Rolling Thunder. I think MSlivka was 2nd. Props to KG, SRaz, Prodigy, Jessie and any other ladies who finished that challenging course.

Someone said there were 7 juniors racing?!?! Props to Zeb Ruby for rolling in strong with a bloody knee. Zeb's band the Wedge will be at this year's

races were won by John W and Pat Scharfe.

John Sieber's Album
Posted by Shaun Radley at 9:20 AM No comments: Links to this post

Owen Gue is the owner/operator of the Cycling House. When he's not guiding bicycle adventures Owen lives in Missoula and enjoys ripping trail, volleyball, Coldsmoke, and backcountry expeditions. I asked him a few questions after his recent win at Montana Series #1 - Homestake Pass.

First off, congrats on your race Saturday. Spectators were reporting that you were taking those downhills to the limit. Is there truth to this rumor :)?
(laugh) There might be a little truth to me pushing the limits a little bit on those downhill sections with Red Danger. I haven't done a cross race for a couple years and I forgot how much fun they were and that course was a blast! I knew that if I was going to have any chance of getting a result I had to go hard on the descents to keep the guys that can actually pedal their bikes fast like Toby, Brendan, Curry and Frank off my back.

Where do the cross handles come from?
Not really sure where my cross handling skills came from. I kinda blacked out during the whole race and when I came-to I was crossing the finish line and it was over:) I use to ride road bikes a little bit so I feel pretty comfortable on two wheeled bicycles.

It's great to see you out on the Montana cx scene. What's your schedule? Peaking for Rolling Thunder? Wednesday nights?
Well right now I'm trying to decide whether I retire and finish with a record of winning 100% of my cx races for 2009. I think that would be pretty cool but there are some races I would love to do so I'm probably not done with racing cx quite yet. I Haven't really looked at the MT CX schedule but I definitely want to do a few of the Wednesday night races in Missoula and with my training it looks like I'll peak for Rolling Thunder. I've had Rolling Thunder on my mind since the last time I did that race in 2006. I honestly think it's the best bike race in North America...and South America.

Will you be racing the red danger all season long?
How could I not race RED DANGER all season. It's the ultimate CX bike and I couldn't image taking a huge step backwards and riding something that was equipped with 8, 9 or 10 speed and/or an actual CX bike. Hands down the best bike I've ever owned... and it knows how to win races.

Who's your favorite cross racer?
That's a tough question. I'm a fan of so many cross racers right now. I love when Sam Schultz tears it up on his mountain bike. Phil Grove is amazing at cross and will have a great season. I also love Toby because he's so strong and fundamentally sound. But if I have to name just one, my favorite cross racer would have to be Bryce Daviess. He just broke his leg two days ago but he's definitely my favorite.

Any big news for the Cycling House this coming season?
It's going to be a great season at The Cycling House. We are launching our new website on October 5th which I'm really stoked about. We're putting together a cycling camp on Maui, HI with Ryder Hesjedal and Christian Vande Velde from the Garmin Slipstream team for December and then I'll open up the Tucson location at the beginning of January. Sam and Andy Schultz are putting together some amazing menus and Brendan Halpin is going to be the TCH full-time triathlon and cycling coach. I'm happy.
Posted by Shaun Radley at 1:01 PM No comments: Links to this post

Thank you Tom from http://www.tomrobertsonphoto.com/ for creating this year's poster. 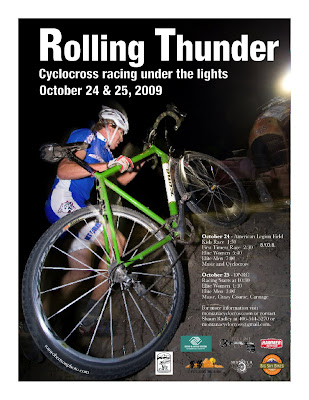 Posted by Shaun Radley at 11:53 AM No comments: Links to this post

Brad Morgan's Race Report
Posted by Shaun Radley at 7:47 AM No comments: Links to this post 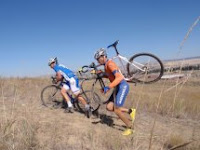 Warren Smith and the crew at Homestake Lodge put on an excellent race last night. The course had lots of elevation. Both races took place under the lights.

The men 4, ladies, and masters b started the night off. UM and TWTT start Johnny Hot Pants quickly ran out in front. A crash pushed him back to second. GAS's Schoenfelder (sp) powered by the fallen UM man and never looked back. In the ladies race, LCurry quickly jumped to an early lead, finishing the first lap in 5th place overall. She won the race and finished in the top 5 overall. Gaskill was 2nd and looked strong throughout.

Next up was the men's 1/2/3, masters a. Toby quickly grabbed the hole shot followed by OG, KV, FrankG, and Thomas. OG quickly capitilized on his up front position and pushed the pace on the loose downhills. I could not see Curry up front and was wondering where he was. Sure enough Curry started his route from the back and quickly passed folks to slot into second. Gue continued to charge the descents and power up the climbs. His lead was too much for Curry to close. KV finished 3rd dealing with mid-race mechanicals. Master's a was taken by the ageless Mikey Longmire. I think masters b was won by le petite rider Pat Scharfe, it was either him or a GAS rider (I apologize).

Day 2 was the famous Butte Sports Complex course. John Coulthard set up a similar course, but the one major change was no barrier before the big run-up. This small course change turned into the pre-race talking point. Ride it? Run it?

Just like the previous night the ladies, men 4, and master b started first. Dusty grabbed the whole shot and eventually passed the lead on to Scott Lenaburg. He didn't look back all race and stole the victory. 2nd was a hard charging Brent Ruby, who is beginning to become famous for his slow starts and extremely fast finishes. In the ladies race LCurry once again grabbed the victory, only this time I believe she was 3rd overall in the race. KG, Joey, and the prodigy all rode excellent races. Masters b I think was won by a GAS rider or promoter John Coulthard.

The men 1,2,3 master a race started off hot with Bad Brad Morgan grabbing the lead and stringing everyone out. After the front group settled in, John Curry launched a vicious attack through the grass and didn't look back. He took the win followed by and impressive Scotty Herzig. Rounding out the podium was Matt Butterfield (another great ride).

-Brad Morgan and Frank Gonzalez both returned to racing after some summer injuries. In true form both racers looked strong and on the road to recovery.

-Next week is the Helena Omnium. The Montana Velo guys have put together a great weekend.
Posted by Shaun Radley at 5:22 PM No comments: Links to this post