Most of the time I try to stay out of the equipment posts, but I wanted to provide some good feedback on a killer deal.

Last season I used the Vittoria EVO XG 220 tubular tires. I bought them last minute from some online website. They were the cheapest tubular cyclocross tires I could find. I had no experience with tubulars and thought I might as well start at the bottom and work my way up. While had my usual slew of mechanicals I never had one problem with the tires. They never rolled, flatted, or cost me any time. At Star Crossed I was amazed how they performed in the mud. When it came to a decision on tires this year I thought why change what's working. I bought a new pair of the same tires for $89. Cycling is often expensive and I get a lot of crap from friends on trying to cut corners on quality, but I think this time I might have found something.
Posted by Shaun Radley at 11:07 AM No comments: Links to this post 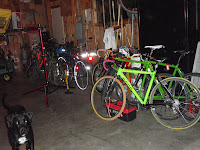 Top Nine CX bikes for under $1500
Posted by Shaun Radley at 10:05 AM No comments: Links to this post

1. This year we're going to host a "First Timers Race." Tell all your friends who think your crazy for racing cyclocross to come out and give it a try. It's only $5! Tell your boss, tell your spouse, tell your mom, tell your bartender, tell your "freakishly athletic friend who doesn't like competition", tell everyone you know.

3. Zeb Ruby's band "The Wedge" will be giving a live performance.

Those are the new announcements for now. In the next month I will release a prize list, a tentative start list, and course map. Also stay tuned for a course video.

Check the right ticker for Rolling Thunder updates. Also the race information flier (not poster) is up. It has not been approved yet, but I wanted to post it. Online registration is available on the right ticker. Discounts are available for online registration and for registering for both Rolling Thunder and Greased Lightning.
Posted by Shaun Radley at 12:09 PM No comments: Links to this post Cyclocross season starts in 14 days at Cross Vegas. For the latest Interbike updates visit Josh Tack's website. He will be covering all the events. Do you remember this picture? Russ in the pain cave.

I must admit I'm late getting the cyclocross bug this year. For some reason I was super pumped in February and March.

The late season road events can either burn you out or make a season. Last year I finished my road season at the Bozeman Crit. It was the result I needed to train for Star Cross and the first half of cyclocross season. This year I ended with the Huckleberry Festival in Wallace, ID. The promoter put on an excellent event, but it didn't turn out super good for myself. I fell on the 180 corner and took out someone behind me. It was 100% my fault......which always sucks. Well before my crash the race had already been decided. With just two NRO, Tack was covering pretty much everything in the first 10 minutes. At about 15 minutes in Shawn Howard blitzed past the finish line on the right hand side. I was in perfect position to roll with him. I jumped on his wheel and had instant flashbacks of Roubaix 2008 (me following a Shawn Howard attack, then pulling through, and blowing). I tried to stay calm, but he was going too fast. The peleton had sat up, the race announcer declared that our move was the winning move. Next time around Howard added more pace and dropped me. I floated back to the peleton knowing that the worst case scenario had just happened. Howard ended up lapping the field and taking the victory. It wasn't a big deal, but ending the road campaign that way left a bad tasted in my mouth. Since then I've been off the bike and on the road, traveling for work.

Anyways.....back to cx. The Missoula Wednesday Nighter starts September 30th and Rolling Thunder weekend is October 24th and 25th. So, far the course setters for Wednesday Night are: Tim Bechtol (bumpy and technical), Jeff C. (short, tight, and mounds), and Toby M. (as many technical parts as possible in one lap). Shout out to Five Valley Velo and Tim Bechtol for putting on the Wednesday Nighter. What a great thing to have in your backyard!
Posted by Shaun Radley at 7:28 AM No comments: Links to this post