Reporting on a Race Report 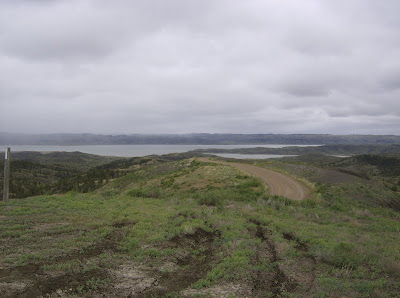 Lots of mountain biking opportunities in and around the Charles M. Russell Wildlife Refuge. The riding is characterized by short punchy climbs, and twisty flat double and single track.

Lot's of good road racing has happened since my last report. Two classic Montana events; Cow Country and the Fish Trails Crit. John Curry wrote a good report about Cow Country. Click here for his report. For new racers I'd recommend taking the time to read these reports. It gives great insight on what goes on in the mind of the winner. Below is the type of stuff you should read if you ever want to win a road race. I bolded the information that I found most interesting.

"Now with the finish approaching, my legs felt as good as they could have considering the previous 4 hours of racing. (1) Frank had seemed to be hurting the last ten miles. Josh looked strong still, I wasn't sure about Brendan. I looked at the other riders' positions relative to me. I didn't want to make it easy for Josh to follow. Without further thought I jumped out of the saddle towards the centerline and accelerated up the climb, trying to ignore the twinging of pre-cramps in my legs. (2) I glanced back after 20 seconds and not surprisingly saw Josh on my wheel. I kept up the pressure anyway and Josh seemed to come unhitched just before the crest. (3) I saw the small gap and pushed over the flat summit, anxiously awaiting the fast descent to recover from the effort. (4) Instead, as I rounded the top I felt a strong headwind that seemed to confirm that I had made a foolish move. I knew I had played my card and there was no going back so I just settled into a pace that I thought I could sustain to the finish. The last few miles were a blur of suffering. (5) I kept looking under my arm to see the three chasers alarmingly close behind. You can see the finish from about 3 miles out, and it looks decievingly close. Finally, a white sign on the shoulder: 200m? No. 1k. Arrgggg... It wasn't until 50m to go that I was sure I had it, with Frank closing fast behind in 2nd."

1.) He was constantly concerned with the energry levels of his breakaway companions. This allows you to time your attack to perfection. GAS and Whitman Cycling both do a great job at racing aggressively. You may be able to cover all the attacks, but no without using some valuable energy.

2.) John wasn't surprised Josh was on his wheel because his attack was probably three fold (drop Frank and maybe Brendan, tire Josh out, or maybe get away solo)...all good things. The point is he knows his abilities and knows how he can win races. He had to tire his companions out until the elastic snapped.

3.) Most riders (including myself) are at their limit at the top of a climb. Smart racers and worker bees always push the tempo at the top of a climb. Don't give your competitors that 10 seconds of rest, make them close that little gap. If your solo; mountain, cross, or road you can often gain seconds by pushing hard over the top of climbs or out of corners.

4.) Over the top he thought he'd made a foolish move. This is VERY common. Most racers are constantly second guessing. Trust your training and stick with your decision. He played his card and stuck with his strategy.

5.) From the report it sounds like he never had more then 20 seconds or so. Yes, it takes great legs to pull something off like this, but at the same time if you attack at the right time and continue to push sometimes all you need is 5 seconds and a little hesitation.

John has great physical abilities, but he'll be the first to tell you that he didn't start winning road races until he got his tactics down. I really enjoy reading reports and talking to racers who win frequently. I've been watching lots of basketball this spring and I'm always disappointed in the post game interviews. Lebron can't explain why he just jumped over a guy and dunked on two more. However, Lance can always tell you why and how he won a race or put time into someone.

I wonder who will win state champs...
Posted by Shaun Radley at 9:01 AM No comments: Links to this post