After Cow Country the blog will be on a brief working sabbatical. I'm taking a trip to Eastern Montana to camp on the prairie, scout out some mountain bike trails, and assist with events. No new posts next week after Cow Country. Check out "That's What She Said About Your Bike," "PURE Bike Coaching," and "NRO Cycling." Those three blogs should cover Cow Country pretty well. If I get to the internet I'll type up my Cow Country observations sometime next week. Thanks to all who keep reading despite my random postings.

ds have been harassing me about what went down on Memorial Day Weekend. Here's my race report........oops I mean "training ride" report.

We rented out Matt Seeley's house in Wallace, ID for the weekend. It's called the Dobson Wheelhouse. I fully recommend it for a cycling trip or ski trip. The crew was mostly triathletes; Chez Ice, L.Corbin, Luebke, Halp, Bryce, Jensen, Mariano, Monica, Herndon, Seeley, and Jeff. I've ridden with these folks alot and thought I knew what to expect....confidently I told Bryce about conserving energy and pacing on long rides (I should have listened to my own advice). I got worked like Thomas Lovkist at the Giro.

Saturday was 165 miles with 12,000 feet of climbing. First we rode up Lookout Pass. The tempo was mellow so I rode on my own with Adam and Bryce just up the road. I thought to myself....alright I could do this all day. No random speed accelerations, no one is crabby, and no sprinting at the top. I was joking around with folks feeling great.

Next up we climbed Camels Hump Road to St. Regis. Seeley, Chezy, and Terminator Jensen set the old Levi Leipheimer pace (no accelerations, just hard, harder, hardest, seeing red). I popped with 500 meters to go and those three along with Bryce descended w/o me. No big deal I thought to myself. The only thing that worried me was that Mariano and Halp had not featured on that climb. Therefore, the next 55 miles of flat would for sure have some random sprinting and hard nose riding.

I was right. All the guys pulled hard along the river to Paradise. I decided to rest, because I wasn't feeling all that great. The pace continued to be 25 mph increasing to 27 mph when "2 mph Besseti" would hit the front. I noticed some of the folks were having trouble on the rollers so I thought that everyone was as tired as me (they weren't). I did my best Jensen impression and pulled the group hard into Plains. Mariano and Seeley stormed by me at the sign sprint and I chased super hard.....what a dumb idea by me. My legs stung bad from the acceleration and I realized I had just gone for a sign sprint at mile 90 of a 165 mile ride.....with 2 mountain passes left and Halpin barely breaking 2/3 of tank. Linsey did a great job of keeping the mood light. I had a moment of internal panic as I congratulated Bryce on his first century. I had not followed my own advice. I had gone into my reserves twice in the last 90 miles and was now in for a long 75 miles.

I looked for Bighorn sheep and tried to eat and drink. I ran out of water, but we were only 10 miles from Thompson Falls. Pop! I shredded my tire on a rumble strip. It takes 3 tubes, 3 CO2's, and 2 busted pumps to fix the flat. It's been over 45 minutes sitting in the sun with no water. My mouth is dry and my energy is low. No biggy we'll just ride tempo into T Falls. Wrong. The last 5 miles into Thompson Falls were like leading into the finish of an M 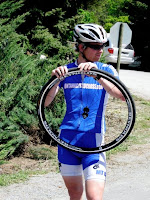 T road race. A small group with everyone giving maximum effort. A flurry of attacks from Seeley, Halp, and Mariano. I dropped back and rode with Bryce and Jen. Too embarrassed to let Bryce and Jen know how tired I was I continued to pull them. At this point I knew I was in trouble. I hadn't ate or drank for and hour and half and we were 115 miles in. I kept thinking of Contrador at Paris Nice. He missed a food stop early on in a stage and riders stuck it to him, Lance said that Contrador, "had a lot to learn." I kept picturing Lance telling me I had a lot to learn too. I rode into T Falls on fumes.

T Falls to Wallace was a blur. People talked to me, I stopped at the creek several times, and I tried to work with folks on the flats and downhills. However, the next 50 miles can be summed up a couple simple occurrences. 1.) On Thompson Pass as Luebke and Bryce rode away from me I shouted to Jen, "I want my mom." 2.) I rode down the pass with Mariano who chipper as can be. He talked to me for probably 15 miles. I don't remember any of the conversation. The only thing I remember is Corbin and Luebke telling me good job as I took my baby pulls at the front. 3.) We found a bar in the middle of nowhere. So, the four of us (Elliot, Corbin and Jen) decided to stop. The little road the bar was on a road that looped back to the highway. I rode the bar, highway, bar loop 3 times trying to find our "friends." On my third lap two guys out in front of the bar pulled me over and said my friends had kept going.

Up and over Dobson Pass we went. One of the steepest climbs I've ever seen. I barely ticked the pedals over and came up a good 4 minutes in the rears of everyone. I descended into Wallace and listened to Halp tell me what went down on Dobson Pass. He seemed so energized. I couldn't believe how fast everyone had ridden up the Pass. I was smoked.

I left the Dobson Wheelhouse the next morning with my tail between my legs. Mrs. MTcx picked up what was left of her husband. We went camping and I drank Pabst. It was just what I needed.

Thanks for reading. See you at Cow Country.
Posted by Shaun Radley at 9:40 AM 3 comments: Links to this post 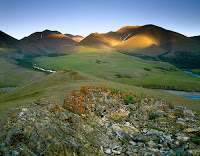 This Sunday is the Cow Country Classic. It's one of the true Montana classic road races. The men 1,2,3 ride a hilly 87 mile course. All other categories ride 54 (juniors 27). Cow Country is essentially one big loop of long rolling hills. The race starts in Wolf Creek, MT and skirts the Rocky Mountain Front. It's truly a spectacular course.

I know lots of Missoulians are making the trip out. I think there will be a big turnout from Bozeman and Helena as well.

The early race season has been dominated by GAS with wins at the Roubaix, Belt and Unscratch the Gravel XC. The last two editions of Cow Country have been won by Josh Tack and Ben Parsons. Both are known for their killer climbing ability. So, does a climber always win Cow Country?

Well....I think that's part of it. I also think you need to have endurance. At 87 miles it's not only the longest road race in Montana, but for most riders it will be the longest race they do all year. It takes a true MT strongman. Also, with the long course; breakaways and teammates become a little more important. Having a strong team is beneficial at Cow Country. The year Parson's won Matty B. was in a day long break allowing BP to sit in for most of the day. Whatever your tactic is for Cow Country....one this is for sure...you gotta have the legs... 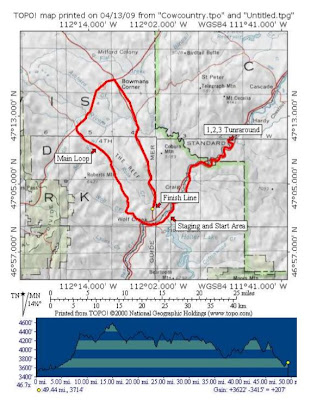 Posted by Shaun Radley at 3:32 PM No comments: Links to this post