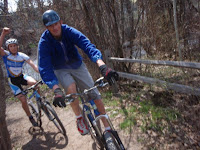 I am such a sucker for excitement. Pipo comes to town for one weekend and talks about trail non-stop and now all I can think about is trail!

"Us and trail have a symbiotic relationship"

"The trail gods have spoken"

All weekend long Downtown Joel Brown and Pipo chanted those quotes. Now just a couple hours away from my first mountain ride of the year I find myself pacing with excitement. Mangy Crew Rides have begun....the spring is here.

I wonder which Montana Road Racers are good at match sprints.......
Posted by Shaun Radley at 3:03 PM 1 comment: Links to this post

Collegiate National Championships - Lindsy Campbell - get used to the name

UM Cycling's Lindsy Campbell is going to Collegiate Road Nationals. In her first year of competitive cycling Campbell has jumped from a women's category C rider to competing for the win in the A's. Known to the mangy crew as simply the "prodigy," Campbell has been there and there abouts the endurance scene for the last couple years. I first noticed the fire in a February group ride. Bad Bryce, and a few others organized a last minute Sunday ride. I showed up to see most folks on their race bikes and Campbell (the only lady) straddling a 10 speed hunk of metal from 79'. Throughout the ride we pacelined and road a solid tempo. She didn't give an inch to anyone. This fire continued through the winter and early spring. Her attitude and competiveness were obvious, but I didn't see her full power until the first race report via phone from Bad Bryce on Sunday March 22nd.

Shaun: Bryce! How was the race?
Bryce: Campbell
Shaun: Nice, how did you do?
Bryce: No man, Campbell
Shaun: Sweet, what are you talking about?
Bryce: I've never seen anyone ride up a hill so fast

Since that first race Lindsy has improved every weekend. During the TWTT finale Campbell put up a 13:43 on a regular road bike with no clip ons. Jen Nerrison has the TWTT record with 13:33 on a full TT setup. Jen is on of the best female cyclists I've ever seen, but just to put it in perspective....

In the conference championships last weekend she placed 4th in the road race and solidified her bid to nationals. Lindsy has 4 wins in 8 collegiate starts. No matter what category your racing that's an impressive statistic for a rookie.

She's going to hate me for writing this little piece, but the world needs to know!

LCampbell is the Real Deal Holyfield.

Good luck at Nationals! Also good luck to MSU athletes!
Posted by Shaun Radley at 10:49 AM 2 comments: Links to this post

Nasty Montana Spring weather greeted the riders Sunday morning. It didn't slow down Brian "Freightrain" Frykman who rode alone for half the day to claim a solo victory in the Rocky Mountain Roubaix. GAS rode well from start to finish. Johnny Curry was in the peleton most of the day and stayed clear of danger. He attacked to claim 2nd behind Brian. Brad and Seb had flat issues, but stayed motivated all day and continued to chase and re-infiltrate different groups.

I will post photos and links as soon as the information comes in.

Thanks Bob and Tamera for putting on a great day of racing.
Posted by Shaun Radley at 8:56 AM 2 comments: Links to this post