Tom Robertson is having an opening for First Friday at the newest bicycle shop in town, Hellgate Cyclery. Hellgate Cyclery is located at 316 N. Higgins Ave., in the alley behind Moose Creek Mercantile and across from Feruqi's. The exhibit will consist of a dozen or so cycling images from in and around Missoula the past couple of years. So if you are wandering the streets of Missoula on Friday night, feel free to stop by to check out the images, drink some beverages, and talk cycling (or skiing, since it's just been dumping up at Snowbowl the past couple of weeks). Hope to see you there.
Posted by Shaun Radley at 4:59 PM No comments: Links to this post

Sam Schultz - On the rise again 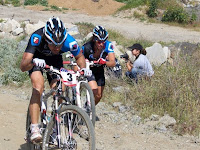 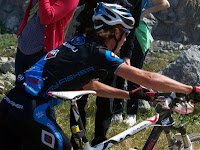 Sam Schultz finished 4th at this week's Kenda Cup in Fontana. The weekend before he was 2nd at the Pan American Championships. Looks like Sam is back at it...putting the hurt on the mtb world. I like how it's common now for the media to mention Sam in the same breath as the best in North America. He and Andy are the future of mountain biking.....and they're from Montana!!! Here's what Sam said about the race:

"The race last weekend was sweet. I felt pretty good from the start but I just wasn't quite in the right position and I couldn't bridge to the lead guys. They were going real fast. I ended up riding with JHK quite a bit and closing down a little time toward the end but not enough. I felt good though and I am really psyched with 4th place."

Andy Schultz finished in 13th right behind the Wells' brothers. Solid start to the Spring campaign for the Missoula native. It sounded from the reports that Todd Wells was caught up in some early race crashes....maybe Andy was mixed up in that as well. Regardless great racing from the Montana Boys. It's great fun having folks to root for on the pro circuit.

I wonder if we could get a Schultzs vs. Wells cyclocross challenge at Rolling Thunder.....