Today's scheduled TWTT has been canceled. I drove the course over lunch. Past the Rattlesnake trailhead is all patchy melting snow. I don't want anyone to get hurt.

Next week is Spring Break and there is no TWTT. So the here's the schedule:

Best,
Shaun
Posted by Shaun Radley at 12:59 PM No comments: Links to this post 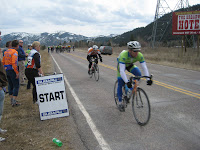 Big turnout for Saturday's Training Race. Hopefully MJCF came away with some money. The race was only 30 miles so the first 1k was predictably hot. After multiple tries the right combination got up the road with Brian Frykman, Kiefer Hahn, and Matt Shryock. Back in the peleton several riders tried their hand at bridging throughout the next couple laps. Elliot Bessetti gave a good push, as did Seth Hansen, Frank G., and Dan from Ride Clean. The attempts were unsuccessful as the three breakaway riders had too big of a lead. Matty Ice flatted on the last lap and that left Freightrain and Kiefer.

Up the road Frykman and Kiefer went head to head for the victory. Bryan came out on top with Kiefer taking a great second place. Matty Ice said it was nice drafting behind Frykman. He referred to him and Kiefer as satelites orbiting a planet (Frykman). The Bozeman rider showed impressive early season power. Kiefer as always was prepared to do work for himself or the team and worked hard to make the break stick. The newbie Matty Ice was outmatched by experience but not strength. He recognized his good situation and gave it all he had.

Once Matty was passed standing on the side of the road NRO tried to set tempo on the front. The break was long gone, but the pain was not. The tempo was enough to catch the B group with around 4 miles to go. Training race rules apply and so once the A and B group combined it was one big peleton. It was nice to see and ride with some other riders for a bit. I've never had Lisa Curry show me the line in the leadout. It's kind of interesting being in that situation and looking for someone to follow. Lisa and Dusty were my picks. At this point on the front Jessie Doll and Seth Hansen had both tried solo moves that I think were reeled in by Scotty Herzig. This helped string out the group a bit. With 2k to go Josh Tack was on the front with Brad Morgan on his wheel. I was sitting in 3rd position. J Doll took a hard pull with 1k to go and the with 500m Dan Pierce slashed up the left hand side. Brad, Elliot, and Stinky snatched the wheel. Stinky launched with an excellent sprint. Elliot came around at the line to take the bunch sprint for 3rd. PURE Cycling Coach Brad Morgan was strong in 2nd. Impressive sprinting by the Italian Mariano Besseti.