If you've raced in Montana then you know who Brad Morgan is. In the past I've given him nicknames such as "Bad" Brad Morgan and "Hardman" Morgan. His team refers to him as Brad "Nails" Morgan. He's racked up some legendary Montana racing stories and he's ready to share that knowledge with you. Recently he became certified as a USA Cycling Level 2 coach. He's got a new blog and is willing to share his secrets on excelling as a "Working Man Cyclist." I really liked the idea so I shot Brad an email to see if he'd answer a couple questions for mtcx.com. Here's his responses (Thanks Brad):

What services do you provide? Training Plans? Wind Tunnel Testing :)?
I am still developing a plan for what all I am going to be able to offer. This is just something that interests me, and I thought I'd give it a try and see how it goes. If people have general questions they need answered, want rough ideas for training plans, on the bike testing to determine functional threshold and training zones, or full on personal coaching, I'd like to be able to help them. I also plan to become certified for bike fitting, so I can help people address those issues in the near future, as well. The wind tunnel testing is just a few years down the road at this point, but I'll put you down for first one in the tunnel when it's up and running.

Will you post on the blog regularly? If yes, what can we expect from your posts?
I hope to be able to post about once a week or so at first. I plan on posting some general training tips, race reports, and progress reports on my own training as well as the training of any potential clients who are interested in sharing their info on the blog. Hopefully, people like it and I can post more frequently as time goes by. I'm not much of a writer, so we'll see how it goes.

What was the deciding factor in you attending the USA Cycling certification clinic and becoming a coach?
This coaching thing has just been an interest of mine for a few years now. I figured attending the clinic would be a good experience. Even if I didn't decide to become a coach, I figured I learn some good stuff to help me with my own training. I have never been smart enough to have a coach help me, so I have tried to learn a few things over the years to help myself become a better, smarter racer. Now, I feel like I have acquired a good base of knowledge, and I would like to use that to help others who are confused or don't have a clear idea of which direction to focus their training in. I definitely don't claim to have all of the answers, or have a secret new training plan to guarantee victory, but I think I can help people get pointed in the right direction and make some significant strides towards attaining their goals. I don't have any grand plans of quitting my day job to run a coaching business, although that would be pretty cool if I could make it work.

You've had lots of success in road and now in cross, what do you think is the most common trait that you and other successful "working man/woman"
cyclists have?
I guess dedication. When your time is limited, and life is pulling you in many different directions, you have to be dedicated to racing. You really have to want it, and enjoy it, otherwise racing is just to hard. At the end of a long, hard day of working and family commitments, getting on the trainer is usually about the last thing I want to do, but I do it anyways (usually). So many days it would just be easier to say I'm to busy to train today and skip it. Next thing you know, you've skipped as many days as you've trained, and you're off the back when the racing starts.

What motivates you the most to train?
Team. The GAS team is awesome. We are stacked with talented riders, who just happen to be awesome people and great friends as well. There's not one person on our team who wouldn't sacrifice their race to help a teammate win. That's what it's all about. Whether I'm the worker or the go to guy, I want to be the best I can be so my teammates' effort aren't wasted. That's what gets me on the trainer on those days I would rather skip it.

You've won several races by solo efforts at the end, is this something that's pre-mediated with your training or is more of playing to your natural
strengths? Also, do you have a set in stone distance you can hold the pack off, or is all by feel and situation?
A little of both. Sprinting is definatley not my strength, so I try to get away from a group when I can. I spend a vast majority of my training time alone, and I do tend to do some long, hard intervals at the end of rides to kinda simulate the late race solo break, so I do train for it. Sometimes I think it would be a lot easier if I just started working on my sprint, as those solo breaks HURT. I don't have a set in stone distance to hold off the pack, but I'm not afraid to try almost anything the situation dictates, you'll never know if you could have made it if you don't try, right?

Posted by Shaun Radley at 7:39 AM No comments: Links to this post

TWTT Round 2 - Newbies and Cold Fingers 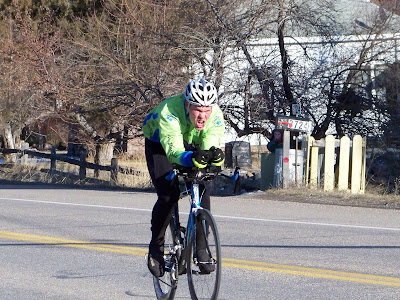 Photos by Tamera B. 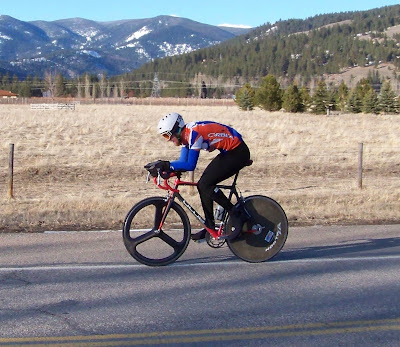 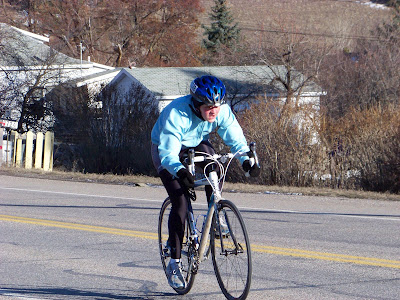 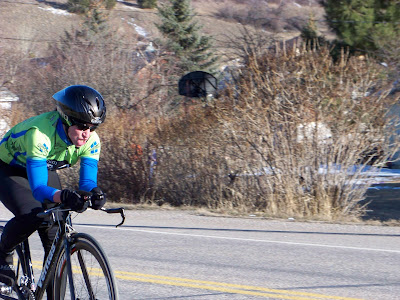 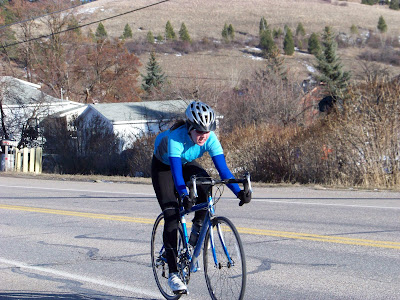 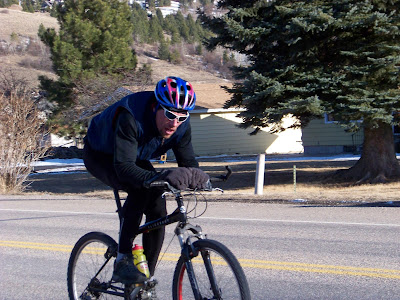 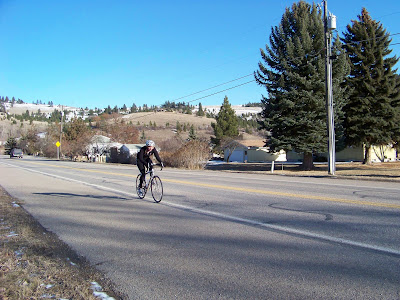 On the coldest TWTT ever we saw a nice crowd of 20 riders. Generally, the times were slower then last week, but a couple hardy cyclists beat their PR. Wes (don't call me Pipo) Furlong continues to perform at a high level with a new PR of 13:39. Also, destroying his time was Dusty Slivka with a 14.09....30 seconds better then last week. Then there was Megan Slivka who came in a blazing 14:31, which not only beat her best time, but it won the day and set a new season record for the ladies.

The Performance of the Day Jersey went to Dusty Slivka. Look at his face in the first picture....and tell me he doesn't deserve that jersey. Great riding.

The World Champ Jersey hangs on for another week with a flying 12:22. Matt (Matty Ice) Shryock holds onto the jersey with another consistent performance. Bessetti with a 12:50 continues his strong 2nd place charge. Matty 40, Besseti 36.......then it gets crazy. We now have a three way tie for third. John, Jeffro (best outfit of the day), and Wes all have 26 points. Tie breaker goes to the best PR which is John from last week, 13:23.

The People's Champ Jersey is now a tie! With Lindsay and Megan swapping victories we've got a dead heat at 38 points. It gets better....we also have a tie for 2nd with Lacy and Rachel locked up at 28. 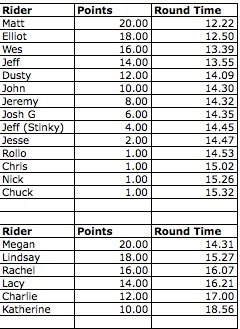 Posted by Shaun Radley at 8:49 AM 2 comments: Links to this post

Here is today's starting order. Any new riders will be off before the first person on this list. So, let's say there's 5 new people....Rachel will start at 5:35. We've got some great prizes this week. Bessetti donated some sweet Power Bar clothing. The prize theme this week is shorts and jerseys. Keep in mind......candy bars for folks who PR. Also, Wes will be wearing the Performance of the Week Jersey. Who will take it off his back? As series leaders; Matty Ice will be in the World Champ colors and L Campbell will be rocking the Mtcx.com jersey.

I have added a new blog to the "Favorite Blogs" list. It's Phil Grove's latest venture; Farm to Market Bicycle Company. If you know Pipo then you know he's always been into alternative transportation and bicycle commuting. He now has a forum to spread some of his Pipoisms. Here's what to look for in the blog and the company:

"For now, it consists of building city bikes for friends, reporting on products, commuting tips and general sustainable living news. With much more to follow" - Phil

Don't forget TWTT is this Wednesday at 5:30. Come lay down a time and see where you form is. Tacos are at 7:30 at Bessetti's. Don't forget our jersey holders are overall leader's Matty Ice and L Campbell, and Peformance of the Day Wes Furlong. Remember best 4 out of 5 count, so even if you missed the first one your still in the hunt.

Did you see Paris Nice on Versus this weekend? Contrador wins a 5.8 mile TT! Wow! I thought short flat time trials for a weak point for the Spaniard. Wait till he gets to the mountains. Versus will be airing the final stage next Sunday. On a side not our current leader in the 5.1 mile TWTT course Matty Ice would have done a 13:43 on the 5.8 mile Paris Nice opening stage. That would placed him in last place 43 seconds behind the bottom. Not bad for the Whitefish native.

Also of not are some Montana athletes racing down in Tucson. Jen Luebke and Brendan Halpin were down South doing some stage racing, here's what Halpino had to say:

"Just raced my first stage race down in Tucson. Finished 7th in the GC. I was 3rd in the circuit race and TT. The road race got messed up and our group was neutralized and a break slipped away amongst the 2's when they passed us for the 2nd or 3rd time. Luebke won the 4's TT, road race, and was second in the circuit race. The circuit race was super fun and I was in a break for 30 + miles and 3 of us stayed away from the pack." - Brendan

Check out Jen's full report on the NRO blog here.

I wonder who will win the performance of the week jersey.....I'm thinking a UM Triathlete....Lacy...or maybe Rachel.....or maybe Mr. Goldburg....
Posted by Shaun Radley at 9:55 AM No comments: Links to this post