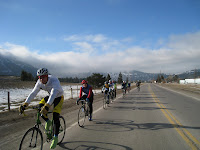 Is this weekend really it?

I can feel it in the air. From Besseti's ride plans to everyone swapping emails and posting on blogs. The road training is beginning. Folks are going to bike shops and looking at their rigs again. I bet you each 11am ride this weekend has 15 riders. Once the weather starts touching the 40's cyclist start riding.

I'll be honest, I don't really know how I feel about it this year. Back when I raced collegiate these times were like Christmas. I'd train solo just waiting for the day I could ride with folks and show them what I'd been working on.

I'm sure those folks going to Valley of the Sun are super happy to have decent weather and fun riding companions. For me, I just don't know. Frozen Flatlands will be my first race and that's in early April. Next weekend is off to Steven's Pass for our annual bc ski weekend. Then a little later is the Hhhhhhoran Agressive Anaconda Weekend. There are still lots of winter activities to be had. Shreddiing pow, and hacking up the skate skis.....

One thing is for sure the race season has arrived in Missoula. People are buying bikes and talking racing. You can't deny the buzz on the streetzzz.

I wonder if Marzullo is training this weekend.....
Posted by Shaun Radley at 3:46 PM No comments: Links to this post 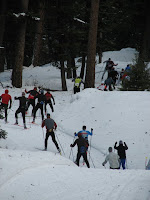 Matty Ice wrote a nice article summarizing his experience at the OSCR. While Matty had his usual break through performance I struggled through snowmobile exhaust fumes and sugar lows to finish just under 4 hours.

I started off slow and let the faster skiers disappear into the woods. Right after the start of the monster climb Jeffro passed me and I never saw him again. I skied at my own pace and tried to enjoy the scenery. The climb was monstrous.....I looked at my watch and saw two hours....with no end in site. I stopped, had a snack and re-grouped. Off in the horizon I saw LDouglas and Bri-wear. I gave it my best effort (probably everything I had left... but we were only halfway) to catch them. As we crested the hill my super waxed skis (thanks Kelly) and my downhill skiing technique (thanks dad) propelled me to pass LDouglas and then Bri-wear. The little andrenaline boost I received from that must of blocked out my need for food and water. Soon after we reached Downtown Joel Browns bacon aid station. Bri-wear mobbed bacon while I loo 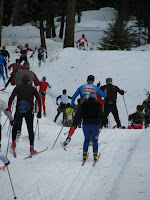 ked on in a sick daze. We left the bacon station as a trio; Doulgas, Bri-wear and myself.

Not a k went by and I started to loose ground. Unlike cycling, there were no attacks at this point just slow mo surges. LD brought the heat and left me in the dust. Then she gapped Bri-wear in search of ole Jeffro. I was exhausted. I kept hitting the gel, but it just wasn't doing it for me. I noticed a right turn that looked pretty official but didn't think anything of it. So, I just kept plugging along looking for the finish. After awhile I came upon a classic skier out for a cruise with his pup. I thought that was odd...I mumbled like a caveman....race.....skate.....ski.....turn....so....tired. He told me he thought I had gone the wrong way. My heart sunk. I looked back to see Tony skiing at me pointing to turn around. In my tired, bonked daze I had missed the red arrow, miss the turn, and neglected to notice that I was following no ski tracks. I finished the race, and looking back on it I'm happy to have just 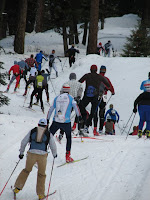 finished OSCR. I understand what JBrooks and DD were talking about......OSCR is an adventure......

I've got a ton of respect for skate skiers. You guys and gals are nasty athletes.

Thanks Jeff for all the advice.

Niels and the Belgiums re-capture worlds 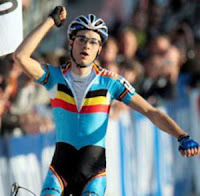 A big individual effort and a united team brought Niels Albert his first Elite World Championship. Ny's kept an in form Stybar on check while Albert pulled away. 6 of Belgium's riders were in the top ten (Albert, Nys, Pauwels, Wellens, Vanthourenhout, Vantornout). The home team was dissappointing with the highest finisher being Thijs Al in 12th. Defending World Champ Boom finished a dissappointing 20th. The best US rider was JPow in 35th. I was a little dissappointed with the US performance, but what can you expect from these guys.....They've been trying to stay in form since Cross Vegas. Albert had a super strong early season and looked to be the next dominator in cross. He got injured, but came back and peaked at the right time. It's almost like the injury forced some rest upon him....and let him build his form back up for a second peak. Albert is the new prince of cyclocross. I can't give him Ny's thrown. He is still the king...