Yes the road season just kicked off this past weekend down in the land of OZ, but it’s never too early to start thinking about the 2009 cyclocross season. Earlier this week while checking out the news on the VeloSnooze, I saw the date for the 2009 edition of Star Crossed. Many of the Missoula cross racers, attended the 2008 edition, along with plenty of top-notch American cross racers. The date (September 19 and 20) stuck out to me for one reason or another, and later in the day I realized it was the same date as SingleSpeed World Championships down in Durango, CO. Because I have already sent in my check for worlds, I knew that I wouldn’t be changing my plans, but I started to think about some of the other fast folks who have raced at both SSWC and Star Crossed.

Adam Craig and Carl Decker both show up at cross races to hand out fistfuls of pain, and both have won SSWC. It goes for Kelli Emmit and Rachel Lloyd (who has shown this season that she can hang with the best when it comes to a cross race). Would either of them want to head back to SSWC to try and earn a matching tattoo on the other ass cheek (I’m not making this up, both of these ladies got their winning tattoos on a butt cheek)? Barry Wicks seems to always race a full cross season, but he was a close third at the 2008 SSWC, and might want to head back for the tattoo. Sue Butler, who I think won at Star Crossed last year, also won SSCXWC last year. Maybe Sue has the goal to be the first person to win both SSWC and SSCXWC. Travis Brown has put the hurt on folks in cross races since I was knee high to a duck, he also has two SSWC victories to his credit, and is a part of the crew of flunkies from Durango who are putting on the race. Is there any chance Travis helped them land on this date, to throw some of the pros for a loop?

I have no idea, but these are the things I think about while I ski, or pedal away like a fool on a trainer. I’m sure few people who read this website care as much about SSWC as much as I do, but to me it just one of those events that you have to experience to understand how great it is. I have yet to meet someone who has raced at SSWC, and when all was said and done they had hated the entire event, and never wanted to be a part of it. So who knows what decisions the pros will make, but I do know that Adam Craig, Carl Decker, Rachel Lloyd, Kelli Emmit, and Barry Wicks are one the list of registered racers for SSWC09. What would you do if you were in their position?
Posted by Shaun Radley at 11:19 AM 3 comments: Links to this post

Tour Down Under - Who's your favorite sprinter? 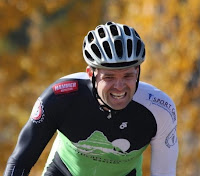 The Tour Down Under is well known as a sprinter's tour. Robbie took the crit but Andre Greipel took today's stage. The defending champ seems to be on nice form. The Aussie's would really like to see Micheal Rodgers win but there both on the same time. If Rodgers gets top 5 in the TT expect Columbia to work for him.

Who's your favorite sprinter? My favorite pure sprinter is Daniele Bennati. My favorite finisher is Di Luca. He's got a crazy fast uphill sprint.

Who's your favorite MT sprinter? Montana isn't known for sprinters. I think my favorite Montana sprinter is Russ Schneider. Super nice guy and great sprinter. I like those new Flathead kits.
Posted by Shaun Radley at 2:45 PM No comments: Links to this post

Katie Compton has won World Cup Round 8 in Roubaix, France. I watched the video on cycling.tv and was thoroughly impressed with the course. A great mix of mud and pavement. Compton stormed from slow start to overtake Hanka K. Velonews reports that Compton is going to skip the last World Cup to focus on Worlds. I think she is going to win. If the course is muddy she'll for sure win. On the junior side Bainbridge Island's Zach McDonald is super hot right now. He's a great pick for the podium at Worlds. Zach snatched third at the World Cup in Roubaix. Tree Farm, Page, and Powers didn't look super hot this weekend, but hopefully their form will turn for Worlds. I haven't heard yet if Page is racing?

If you haven't gotten your fill of cyclocross check out cycling.tv's coverage....excellent. Anthony and Brian are my heros. Also, there showing the Tour Down Under (also seen daily on Versus). Speaking of the TDU. Ole Robbie never gets tired of winning. Don't ever count out Robbie in the last 50 meters of a sprint. He's still got it!

Me weekend consisted of skiing on Saturday and riding on Sunday. It was great to get out of the Missoula fog. Here's a couple photos from the weekend. Photos by Tamara 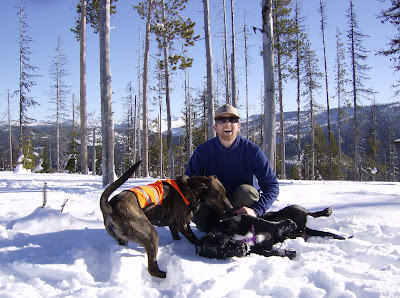 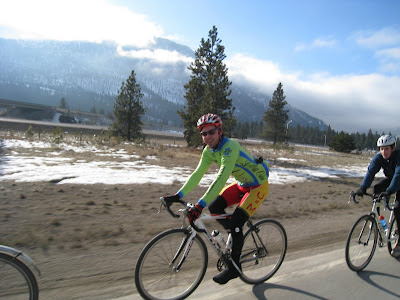 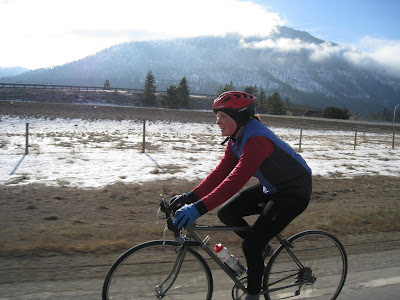 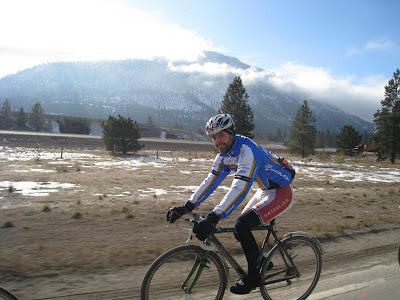 Posted by Shaun Radley at 2:57 PM 2 comments: Links to this post