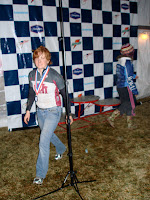 Lindsy Campbell finished 2nd in the D2 Cyclocross Nationals race. While Campbell has impressed on the road bike this is a breakout result on the dirt. Her goals for the road season include Collegiate Nationals, and U23 Nationals.

On Sunday afternoon in Bend, OR I put on my favorite kit... the one I wear when it's time to rip legs off...

It was a beautiful day, sunny. The snow and ice had melted off of the course and it was muddy. I was incredibly nervous before I got on my bike but as soon as I started warming up on the course every worry I had melted away: it was nice out, I was dirty, and just down-right having fun riding my bike.

They started the D1 women a minute before us and a primal drum beat could be heard in the distance. The gun went off and I sprinted. Everyone was left behind except for me and Dartmouth girl...Arielle...my sprinting nemesis. I edged her out in the Collegiate National RR but she bumped me off the podium at the U23 National Crit by the width of a small insect that is so small it actually lives inside of another insect. Anyway, I knew what was going on because I knew Arielle. I stayed with her for a half of a lap but it was inevitable... she could just put time into me on each corner. No matter, I was having the best race of my season riding in second and I didn't let her get more than 40 seconds ahead of me in the 40 minutes of racing that we had that day. (I'll be ready for Madison...I hope Arielle will be ready for me, too)

So for some freak reason I just felt like a total beast. I kept thinking I was getting tired but then, a couple seconds later, I would feel good again and stand up and put in some good stomps after the corners. The energy from the crowd was unreal. Imagine 5,000 people yelling plus a marching band, plus flags waving in your face, plus horns, plus costumes, plus one guy dressed as a pirate playing a saxophone. I was happy a lot of people recognized my kit and cheered for the Montana Griz. I had so much motivation it was incredible. I just kept going and going...picking off D1's and eventually into sixth or seventh place in their race.

Then the race was over. It felt good to be on the podium. A good way to end a really good year! Also, I got to meet Andrea Smith: a UM alum who got sixth in the elite women's race. Really, as far as I can tell, anything is possible, you know?
Posted by Shaun Radley at 8:41 AM