31 hours and 45 minutes to the Start of Montana Cyclocross 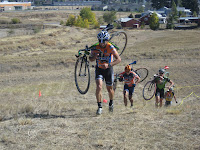 My tubulars are glued, and travel plans are set.

After riding with Missoula folks this week the general consensus seems to be nerves and unknowns. I love it. It's too early to predict whether or not he or she is the one to beat, but I'm sensing that lots of riders think that there has been a leveling of the playing field. Maybe, it's because it's the first race and everyone has "hope" of being a contender. Particularly, in the podium chances for the men, and the overall winners for the women. That said LCurry's recent results make her a favorite anytime she's racing in our region. Same needs to be said about John Curry after his impressive Rad Racing and Cross Vegas. On the guys side I can only speak for the Missoula crossers, but Toby, Alex, and an emerging number of new cat 3's could make the 1-10 places very exciting. Also, I know that master Grove has been on form for most of the late summer and plans to make a run this season. Another Flatheader back for more is Benny Parsons. He's been living off of the endurance mountain bike stuff this season, but don't count him out for the podium in any cross race. The Montana Velo crew always has 2-4 potential winning cross racers and you know KV has been racing. Last year GAS had the best cross season. With Lussier, Flurry Curry, Bad Brad, Thomas, and JDelmue in the 4's......you've got consistent performers. They also bring cross wild cards to the table like Frykmania, Seb, and any of the MSU guys.

Who's going to emerge for the ladies. Slivka, Dowd, and Curry all did early season races and looked strong. Last year's Rolling Thunder champ AFrykman should be around. Gaskill has committed to some racing this year as has the prodigy. Lot's of ladies will be trying cross for the first time this year, and there's no telling who could emerge from that group.
Posted by Shaun Radley at 10:51 AM