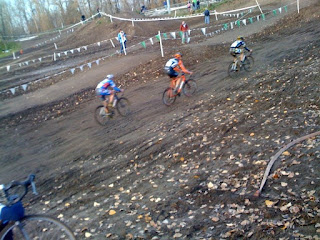 Early reports have come in. While Tim Johnson successfully came back from knee problems to win Day 1 in Portland, our Montana masters were strutting their stuff. John Fiore of Team Montanacyclocross.com place 6th on the day. Bill Cochran was in the top 5, possibly 5th. That's all we've got right now. Muller was 17th. Keep checkin up!
Posted by Shaun Radley at 5:15 PM No comments: Links to this post

I didn't know for sure who was going to Portland, but over the evening an into this morning I was made aware of a couple more MT riders that are headed to the GP's. Montana cross legend and creator of Herron Park Cross, Steve Muller is headed to Portland. He will try to better is 8th place last year in this event. Steve fought an injury early in the season and is trying to come back for a strong end of the year campaign. Also attending from Great Northern is Howard Williams. Hdub dabbled in cross last year, but this year he's gone full throttle and attended numerous races. He'll be repping Montana and Great Northern in Men's B race. The B race will be crazy!! Good luck Hdub and Muller! Keep us posted.
Posted by Shaun Radley at 8:09 AM No comments: Links to this post

This weekend's US Grand Prix's of Cyclocross will be well represented by MT racers. Montana racers are coming from Bozeman, Missoula, and I think maybe Helena. One man who I know is for sure attending is John Fiore. John has quietly had an excellent cross season. He moved to the men's A races after solid perfomances in the masters A. This time of year is when he starts to get the engine going. He'll be providing mtcx.com with reports from Portland and Nationals. Also attending is an excellent crew from Bozeman. Newbie crosser Patricia Dowd is making the jump to

the big leagues and his stoked about it! Also attending are Montana all starts Bill Cochran, John and Lisa Curry, and Amy Frykman. Sorry if I forgot anybody, that's all I've heard of. This is so great to have Montana racers travel to the big stage. Bill and John will represent Montana in the masters, where Fiore 7th and 10th last year. John Curry I think will race the 3's (not confirmed), where he should have an excellent shot at winning. Lisa will test her strength in the women's elite and Frykman and Dowd in the women's 4's. I'm excited to see what happens. I'll try to keep the site updated this weekend as soon as I get Montana reports! GOOD LUCK

MT CROSSERS!!!!
Posted by Shaun Radley at 3:39 PM 3 comments: Links to this post

Vanderwood Rookie of the Year 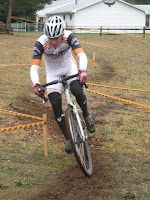 Good cross racers are hard to find in Montana. Most good Montana crossers have strong ties to the sport of cycling. Bob, Frank, John, and many others tried their hands at mountain, road, and were often inspired by friends who biked and got them into the sport. It's rare for a racer to show up on their own time and try cyclocross racing out of the blue. To take it one step further it's even rarer to have someone dominate the cat 4's move up to 1,2,3's and finish middle of the pack like it's nothing. Karl Vanderwood is the Montanacyclocross.com rookie of the year. He won every race he entered as a 4 except Rolling Thunder. Once he became a 3 he didn't miss a beat and finished 8th, 6th, and 9th in the last three races of the year. Quite the rookie campaign for a guy who can flat out ride. I'm excited to see what Karl can do next year. He joined Montana Velo for the second half of the season and will benefit greatly under the wing of Proctor, Frank, and Herzig. Karl received 37 votes (33% of the vote).

Second was Northern Rockies racer Jessie Doll receiving 30 votes. Jessie's late season burst proved to help sway voters. He finished 3rd in the 4's Montana series with top performances in Helena (1st), the State Championship (2nd), and FVV (2nd). His breakout ride was a 6th at Rolling Thunder riding the whole day solo in what was a stacked 4's field.

Third was Rolling Thunder champ Amy Frykman. Frykman was one of only two women up for rookie of the year and collected 21 votes. Amy had a good race in Helena, including a soloing of the front of the dirt crit, but then disappeared until her eye opening ride at Rolling Thunder.
Posted by Shaun Radley at 2:15 PM 2 comments: Links to this post