Tomorrow is the Montana State Cyclocross Championship. It's been a great year in Montana. The biggest year since I've been racing. The course is set and ready to rock. We had a great crew setting up this morning (KSS, Fiore, JBrooks, JDoll, Bobby, and Tamara). The course ended up being twisty and contained. The Fort doesn't have alot of elevation gain so we made it hard where we could. I think it's a wonderful course that reminds me of the vintage Hartman course setting days (including the hopable barriers). The weather looks good, and the Fort should provide a nice backdrop for the drama to unfold. For some reason I always rememember the state races in Montana. I can replay last year's race in my head like it was yesterday. I think others are the same way.....

Tomorrow's course should be suited towards power riders who are good in the corners. There are 4 potential dismounts per lap, but one is hopable. The dismounts don't involve heavy running, with only one short run up. I expe

ct to see riders like Proctor, and Lussier to have solid races. Besides the Men's A's I think the Masters is going to be the battle to watch. Fiore vs Wehyrich vs Cochran, great racing! Also, the women should put on a nice show with LDouglas confirming her appearance and maybe a possible showing by Tracy Thomas. LCurry will be tough to beat if she races with the ladies....and look for another state championship from the Bozeman native.

Maybe Vertical Earth will show and we can have another Idaho vs Montana battle......

Regardless, the course is ready, the Pabst is on ice, let's get ready to rumble!
Posted by Shaun Radley at 1:04 PM No comments:

DNRC Cyclocross - Lots to talk about and not very much time 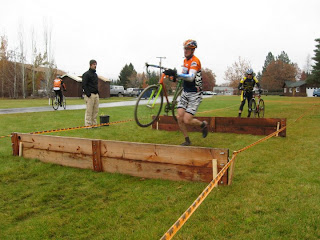 Montanacyclocross.com is back. I thought it was lost in cyberspace forever. Thanks to everyone who emailed, phoned, and facebooked. I appreciate the comments. To make a long story short I forgot to renew the domain name for the blog. However, it took me a week to finally figure out what was going on. The renewal notice was sent sent to an old email. Techno crap.

So, back to cyclocross! I didn't even get to post about our home race DNRC cross. I thought the course was wonderful. A nice touch of mud and some tricky corners over varied scenery. Good turnout for a late season Montana race. I saw lots of Missoulians, and some usual MT CX suspects. Props to Soph SAK "Captain Kirk" Kircos for loaning me the Ramblumtick. In my rushed state back to the pit area I had three options; fix the chain, ride KG's Ridley, or ride SAK's Ramby. Easy decision.... as I still stare at my old Ramblumtick frame in the spare bedroom quite frequently. As for the racing it was fairly predictable. I watched the men's 4's with Kid Curry and Martini. Two excellent people to watch a race with. Curry thought Delmue would be up there and we all agreed, but I knew that Chad Dear was a smart racer and wouldn't let him get away. Also, I thought the two NRO bros would be high up JDoll and DPierce. It turns out we were close. Delmue rode away with the victory but had to shake Doll and Chad. JDoll powered to 2nd followed by a late surging DPierce. Pierce's best race, and Doll's best besides Thunder. Delmue looked solid as usual. Chad thrived on the technical stuff early but faded just a bit to finish fourth. Picture is Dr. Ruby who had the ride of the day in 5th. He was the last person off the line!!!! In the coming days I'll post some Euro shots of the Ruby.

The ladies race was great entertainment. Lisa started with the men 4 and, so the ladies race was bump and grind all the way to the finish. Tracy T and P Dowd were banging heads early until TT caught a gap to claim her first MT win (she should race more cross). 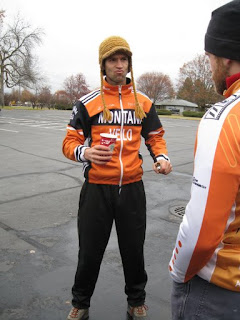 In the men's race the most shocking event was seeing the Vertical Earth van pull up. Until the van showed I figured it would be a battle between MT Velo and GAS. Hopefully everyone remembers this years Rocky Mountain Roubaix and how VE dominated Montana's Queen Classic. I had not forgotten. I was even keeping up with the fellas in their own series over in Spokane. Kris Holden had been racking up results and Mike Gaertner killed the Masters 30+ at Star Crossed and Rad Racing. Also, Gabe Varela had a breakout rode season, and put the hurt to me and Bessetti at Rad Racing. I knew it would a great battle. I don't know how the racing played out, but Curry bobbled in the woods and FRANK the TANK strolled back into to victory lane. Proctor was doing battle with Holden. It was great to watch. Holden who I noticed had a bad start surged to third place with Proctor and Gaertner rounding out the top five. Beyond that I thought everyone played suit. I was willing Bobby and Fiore into the top five but Martini, Varela, and Gaertner were too strong. I thought the race was great and on a side note Montana has some seriously fast cx racers. I can't wait for the next month where we get to see some of our finest riders compete on the national stage.