Posted by Shaun Radley at 10:51 AM No comments: Links to this post

Happy Halloween!!! The Halloween race was a blast. Check out Sieber's photos on the link above. The Gym Teacher won, but was challenged hard by Bravehart, Joe the Plumber, and Superman. In the costume contest, Meryl Mary Storb took home the prize riding the whole race in a goldfish costume. Thanks John Wearwolf Fiore for setting up a great course. Should be some good action this weekend in Helena. Byron from G Divide says he's revamping the course. I'm skipping this weekend to take a cross breather. However, the following weekend in Missoula is going to be epic. It starts Saturday night with party and GIRO movie premier at MBW, 7pm. Sunday is a new venue!!!! UM Cycling hosted a cross race at the DNRC a couple years ago, and FVV is returning again for another year of pain. Course designers include John Wehyrich (long laps, flat and fast) and Kyle KSS Shannon (barriers, run-ups, technical). Should be a good mix of folks. We're trying to get music for the race and lots of spectators. Hope to see ya'll out.
Posted by Shaun Radley at 10:36 AM No comments: Links to this post

The best race of the year is tonight! All you need is a costume and a half working bicycle. Cross expert John "The Magician" Fiore will be setting up the course. Kick off Halloween the right way......on a cross course! 5:45 start time.
Posted by Shaun Radley at 1:13 PM No comments: Links to this post

Posted by Shaun Radley at 10:51 AM 2 comments: Links to this post

Off the Grind throws down sickest video of the year


Herron Park Cyclocross from Off the Grind on Vimeo.
Posted by Shaun Radley at 7:52 AM No comments: Links to this post 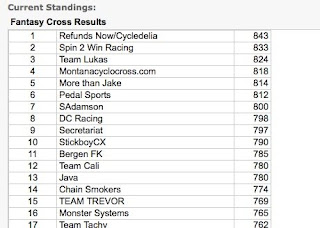 I may not be up to par with the actual racing my bike, but I'm 4th out of 221 in the CX Magazine Fantasy Pool. Click the link if you'd like to enter. It's a hoot.
Posted by Shaun Radley at 3:26 PM No comments: Links to this post 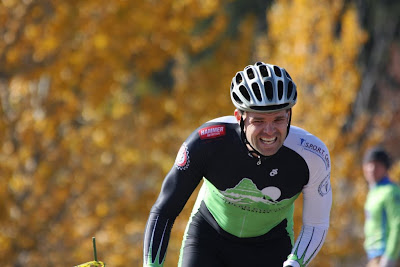 Woodland was put on by Matt Butterfield and the Sportsman's Ski Haus crew. Woodland Park is a great venue and offers a variety of terrain. Highlights include a switchback paved climb, singletrack to run-up, and fast forest roadish descent. I loved the course last year and was excited for Saturday's race.

LC joined the men's 4/masters B group and rode well. I think she cracked the top 7. In the women's 4's Julie Z took a well deserved victory holding off her own teammate. Great job Julie, everyone was stoked on the win. Third and fourth were teammates KG Grover and SAK.

The men's race was dominated by new MT Velo rider Karl Vanderwood. He looked smooth as butter riding away from the field with ease. I was wondering when the Velo crew was going to snatch up the rookie of the year.

The men's 1/2/3 race had the usual suspects and a few new faces for this season. Pipo Grove was in attendance. As was power man Eric Greenburg and recently upgraded A Genco. The race started off a bit weird but soon settled into the usual battles. Curry was on his own after a Frank mechanical and Proctor mechanical, cr

ash?? John dominated the day and the chase group didn't even get close. If you give JC an inch he'll make it a mile in a quick hurry. I'll put up the video ASAP so you can see Curry hopping the uphill barrier. It was very Todd Wells esque. 2nd through 4th was fought amongst the hard men of cyclocross. Who do you think I'm talking about???? Of course, Bobby P, Lussier, and Proctor. Brad wasn't there, but if he was I bet he would have been in that group. Lussier and Bob were riding along in 2nd and 3rd until Geoff bridged up after his early problems. These three attacked eachother nonstop. Bob was running and mounting really well. Proctor threw in some digs on the single track, and Lussier was solid all around. It was cyclocross at it's finest. No one was strong enough to go on their own. Lussier attacked early after the descent before the finish and held the gap to the line. GAS 1......2. Bob came in third (best finish of the year) and Geoff who I thought had a great ride to bridge to this group finished 4th. Guess who was fifth?? Yes, power man Eric Greenburg. Yes, he can ride cyclocross, and yes he has and endless supply of power.

Agressive rider of the day goes to Phil Grove. He switched bikes and still managed to pass half the field. He was breathing fire all day long. Wish you would race more Pipo. Your fun to watch! In traditional Phil fashion he was able to put himself into the zone and power through a course, that I think suited his abilities.

Besides the Proctor, Presta, Lussier battle the Great Northern/Wehyrich sandwhich was my favorite of the afternoon. Craig pulled a great ride to hang with John, and good ole C-man tagged on the back. It was super fun to watch this unique group go at eachother. Craig was great on the run-up, but John was able to hang with him and grab the masters A victory.

We'll save the bottom half of this race recap for the "life at the back report." Like I said above I was into this course and expected to try and crack the top ten. I had a good start and was leading a group just behind Cman. My chain snapped and I was back at the pits with DT JB. I thought JB would work his magic, but my chain was to short and with the links taken out the derailuer was stretched to capacity. I was upset about the chain, but more upset that I didn't finish the race. Cyclocross is all about perserverance. I could have rode my bike as a single speed or at least jumped on JB's. It's one of those things that haunts me in winter months. Not finishing races. Regardless look for links to other race reports. Hopefully E Bessetoo will give us his take, maybe Bobby, and also the GAS fellas.

Thanks for reading.
Posted by Shaun Radley at 10:13 AM No comments: Links to this post