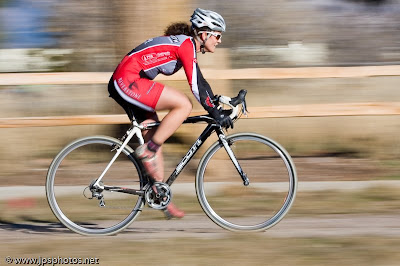 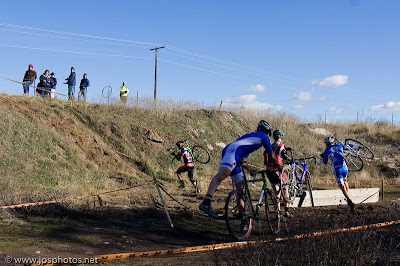 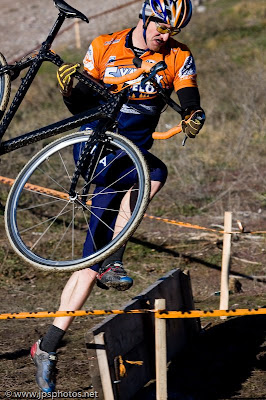 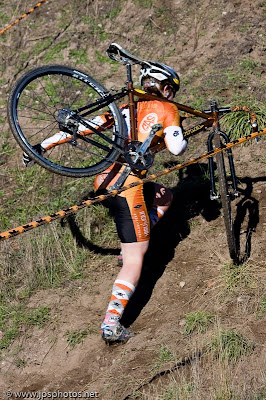 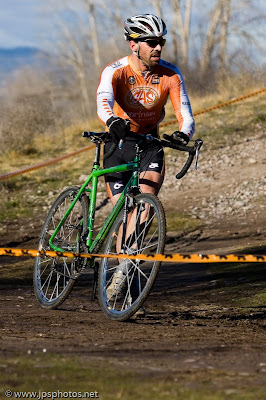 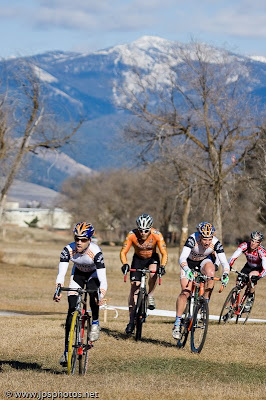 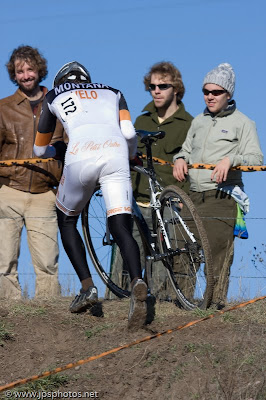 This year's State Championship was great. Racers and spectators were treated to a short, twisty circuit. As you can see from the photos the weather was beautiful. All the photos were taken by John Sieber, http://www.jpsphotos.net/gallery/bicycleracing.cfm?event=MTStateChamp08&m=3. Thanks to Tamara, Kyle, and Bob for promoting the race. Also, thanks to the entire NRO crew for volunteering.

The women/men 4/masters b race was up first. First thing I noticed was JDoll with a super fast start knabbing the hole shot. He was followed by a nice little group of Chad, JDunph, Delmue, a VE fellow, and a couple others. Soon the dust settled and their were just two in front.....JDoll and Delmue. Jessie was paying a little bit from his earlier efforts but wasn't giving an inch. Jason used phenomenal tactics and strength in attacking the NRO man at the perfect time. From their it was a pursuit to the finish. Jason took the gold and the state championship after a dominating men 4 debut. Impressive was Jessie who has put his bid in for the most improved rider. Riding in third most of the day was the Vertical Earth rider who looked great and gave up little ground to the two leaders. For the second Missoula race in a row the doctor charged through the ranks of Masters B and Men 4 riders to finish in the top 5! Props to DRuby. Duvall stayed consistent like he has all year and was railing the corners.

The ladies race was highlighted by a much anticipated showdown between Vertical Earth's Jenni Gaertner and Lisa Curry. Jenni grabbed the early lead and never looked back. Lisa pushed hard and didn't give much ground, but the VE rider was just too strong. Jenni was strong from start to finish. The women's 4 race was fun to watch. We had a nice group of the strong women. NRO, GAS, Delphine, and Muleterro were all repping. I think Frykman took the race, but the heat was coming from behind. TT (Tracy), PDowd, and LD were all gunning for the Delphine rider. It was excellent racing from the the ladies after a breakout year for Women in Montana Cyclocross. Curry looked textbook through all the obstacles as did many of the ladies.

The second race of the day had numerous battles that were anxiously waiting to be played out. Once I saw Redline's Kevin Bradford Parrish register I knew it would be a long day in the saddle for our MT riders. Kevin frequents the national circuit in mountain and cyclocross. We've seen him race Star Cross and numerous other large events. Also, the Vertical Earth van pulled up and then I knew it would be an even bigger task to keep to State Crown in Montana. I knew Gaertner's experience would suit him well in a twisty short course. The race played out with a big group up front. Then the Redline man hit the gas and was never seen again. The chasing group settled into Gaertner, Proctor, and Curry. Just behind was The Tank and Doug Dale (wearing a pink helmet cover). Curry was in a cross legends sandwich as the two more experienced riders took the corners with ease. John didn't give up an inch and claimed his first cyclocross State Championship. Gaertner got way from the Montana boys and took second on the day. Rounding out the top five were Proctor, and Frank. Great racing by Doug Dale kept in contention as he ended up 6th.

While not surprising I thought Geoff rode an excellent race and put himself in the hunt for a state championship. Doug rode great. I have to publicly apologize to Dougie. I've been giving him a hard time about his lack of results, and he came out and killed it in a stacked field. I hope mtcx.com can sign the wild man again for next year. The two GNC riders Cman and Schmidt rode a great race. Also, Vanderwood, Thomas, Dollar Bill, and Lussier continued their Montana hard men legend by riding solo to top ten peformances. Overall I thought it was a nice close to the Montana season. No crazy surprises, but solid racing by folks who've been doing it all season.

The Master Men A was also a much anticipated battle between Cochran, Wehyrich, and Fiore. Johnny Fiore stole the show and grabbed the state crown. Wehyrich had a nasty spill early on that took him out of contention. Cochran stayed consistent and didn't come away empty handed as he won the series title. Fiore didn't win overall as a Vertical Earth rider took the victory.
Posted by Shaun Radley at 8:07 AM