Rolling Thunder - A man with a plan - Tyler Hurst 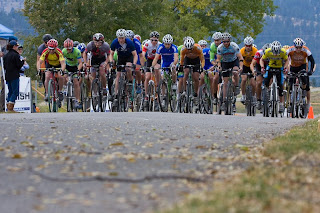 I know he didn't plan it this way, but Tyler Hurst's emergence onto the cyclocross scene has been flawless. It started in the late summer where his roommates (DT JB, Horanimal, and Baby Matty) began harassing him and his girlfriend Ali to race cross. Honestly, I was more interested in getting his girlfriend to race. I knew it would be cool if we could get another strong women out there. I'd ridden with Tyler a couple times and knew he was strong rider, and a good bike handler but I thought his motivation to race had come and gone with his youth. After his Wednesday night debut he placed 26th, and I thought that he was just out for fun this year, and it was great having him in the scene. The next week he figured his crap out and came in with a plan coming in 2nd. The week after that even more motivated he won his first race. He won by leading into the most technical downhill and not looking back. His bike handling skills are good, but what's under estimated is his desire to win. I think many of us saw it on Saturday afternoon. I've heard lots of stories about Vanderwood having mechanicals, but the bottom line is that T Hurst was well off the leaders in the middle of the race, tagging with the leaders in the middle of the race, and coming around the last corner in first place. We didn't see a race like that all day. Someone who was in the chamber work his way to the front, and then win the race. Excellent riding.

The race was fun to watch. It was great to see a couple others join Delmue and Vanderwood at the head of a 4's race. Dustin Phillips and T Hurst latched onto the two leaders to form a group of four. I think Jason had a mechanical, because on one of the laps he came around a little off the leaders. Into the last lap it was Phillips leading followed by Vanderwood and then Hurst. Delmue, Vanderwood, Hurst, and Phillips all rode brilliantly on the front. I was thinking Karl would take the W, but Hurst came around that last corner and I couldn't believe it. Great exciting racing. Hurst, Phillips, Vanderwood, and Delmue.

Rounding out the podium was another consistent performance by A Genco. He's leading the Wednesday night series, and been up in the top 5 all year long in the Montana Cup. He rode solo for most of the race. As did 6th place Jessie Doll. Great ride by the NRO man to hold off a nice group behind him. His teammate Dan Pierce held off a hard charging DT Joel Brown to grab 7th. JB was 8th, 9th was Jeff Seaton who was riding excellent technically, rounding out the top ten was 5VV rider Justin Cloute. 7-10 were riding together for a long time before Dan broke it up.

Other notable performances included to solid riders coming in 11th and 12th, Chad Duvall and Murphy. I thought Cory Hard rode a nice race and had the best post race outfit. Props to the juniors Wyatt, Sullivan, and Lucca for riding two races.
Posted by Shaun Radley at 12:54 PM

did someone say seabiscuit?