Rolling Thunder - I'm not Surprised, and neither should you be - Sam Krieg 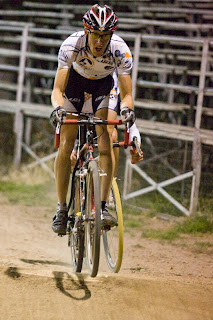 For those of you who were surprised to see Sam Krieg take the Rolling Thunder victory.........don't be! He's a heck of a cyclocross racer and has been winning races (including last year's Bozeman races) for a while. Last November MT Cross posted a short blurb about him nabbing 6th and 7th at Jingle Cross, http://www.montanacyclocross.com/2007/11/did-anyone-see-sam-krieg.html. After he won the Bozeman races last year we did a short little email interview, http://www.montanacyclocross.com/2007/10/rider-profile-sam-krieg.html. We've actually been covering him since the inception of the blog one year ago. He's a great rider and one the only guys who races with the big boys on a consistent basis. Anyone who has talked to Sam knows he's a super nice guy. We were so lucky to have him at Rolling Thunder and we wish him well with the rest of his season. I think he's got 100 new fans in Montana.

Bobby P grabbed the hole shot and looked tough early on. He was followed by the Montana all stars Brad, Frank and John, and the two Sam's. The second group contained Geoff, Toby, Dale, Lussier, and a believe a couple others. As the adrenaline wore down so did the racers. Things started to settle in and the lead group formed. Sam Krieg, Frank G, J Curry, and Sammy Schultz hanging on the back. Curry and Frank looked excellent. Everyone seemed to be swapping turns nicely. I liked the dynamic of the group, thinking it's kind of a 2 vs. 2 situation. Both Curry and FG put in surges that only Krieg could follow. Finally right at about the halfway mark Krieg put in a surge past the finish that put the MT riders into difficulty. Sam didn't look back much and through the course, looking faster and faster on each lap. Curry and Frank took turns pulling and I think even had a crash or two that didn't help the chase. Those Montana fellas looked fast. I feel like we've been covering Frank and John alot and saying how fast they are, but at Rolling Thunder I think they proved to a local Montana audience that they really are on the next level. While the two MT fellas were going at Sam Schultz was getting his brakes figured out and powering towards them. He towed Dale around for a bit and rode as well. Eventually the Subaru Gary Fisher rider was too strong and passed FG and JC to take 2nd. Frank got his second 3rd in two years and really earned it. Curry came in for a strong 4th and Brad rounded out the podium in 5th. Brad rode the whole race by himself. He held off a surging Geoff Proctor and Alex Lussier. Who finished 6th and 7th. AL had a great sprint on the pavement to take 6th. In 8th looking great was top montanacyclocross.com finisher Toby Meierbachtol. He rode with Martini for second half of the race. Martini surged through the field and took the 9th spot. Rounding out the top 10 was Tomas Dumbrovsky who just like I thought had a heck of a race.

Other performances of note were John Wehyrich's impressive masters A win. He took it from Bill Cochran who'd been killing that category this year. I think John was riding somewhere near 13th for most of the race. Fastest over the barriers was by far Craig Prather of Great Northern Cycles. He was flying over those things. I loved the triathlete battle which started as Halpin, Seely, Bessette, but ended with Bessette getting the better of the two. I also though Freight Train Frykman rode a great race. After mechanical issues for most of the season he looked awesome.
Posted by Shaun Radley at 7:59 AM

Shaun,
You and your entire crew did a great job on Saturday night. People had a blast, the racing was great, and things went off smooooth. Awesome work!!
Bill

great race,,, definitely worth the drive...I wish all cross races were as well run, and had half the atmosphere you guys provided. Killer venue...
no doubt that the MT...crew can race cross... I am sure 2009 will be scary fast...I just started training for 2009 Rolling Thunder.

Well done! Great committment and follow through to put all the pieces together. You guys all deserve recognition and suffering has never been so fun.

what is it about riding 2000+miles in 20 days that makes you MORE likely to dnf? Nice job brendan and elliot. WTF working-man champions?