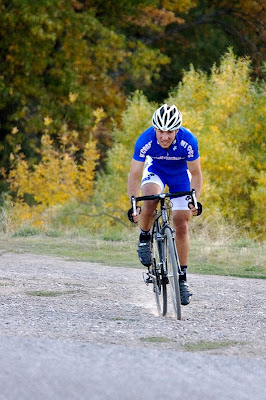 Bob notched another victory last night at the Wednesday Night Cross Races. He outlasted Dave and Dale. The course was well laid out by Dave. Lots of turns and really fluid. The three leaders broke away early and were never seen again. Dale crashed hard and that put him out of contention. Bob used his good form and rode away from Dave. Elliot rode well and got within 5-10 seconds of Dave on the last lap. He claimed third. Troy and I rode most of the race together, and both fought through crashes. Fiore rode strong in 6th followed by Kyle.

The ladies race was taken by Megan Slivka. She rode hard from the start and held off all challengers. A new crosser took 2nd. I heard her name tossed around, I think it was Nicky Phear. She rode great. Sak hung on for third and Laurel had a bad crash that took her out of competition.

Men's B was another huge turnout. With fields almost in the 30's the holeshot is becoming more and more important. The men's B riders are starting to realize the importance of cross tactics and positioning. J Dunphy with the help of Dusty snatched the hole shot. Soon enough mountain bike Dillon started putting the power down. He was hopping the single barrier and making the course look easy. He grabbed his first Wednesday night win of the year and looks tough to beat on anything with obstacles. There was a nice group on the front working together. I'm going to throw out some names of jerseys I saw; Dunphy, T Hurst, Dillon, Larsen, Bookwalter, JB, T Sullivan. The B's have so many entrants I'm loosing track of the results. I know Dillon won (great job), but I won't post unofficial results beyond that cause it would be way off. Go men's B's!

Masters A and B was hard fought. Alex and Wehyrich got tangled at the start, allowing T Sullivan to jump away. I don't know the results of this race either, but I think Sully grabbed the victory in the A's and don't know who won the B's.

Photos by John Sieber in the next couple days.