Big Sky Cyclocross - The Frank GGGGGGGGGGGGG call is back! 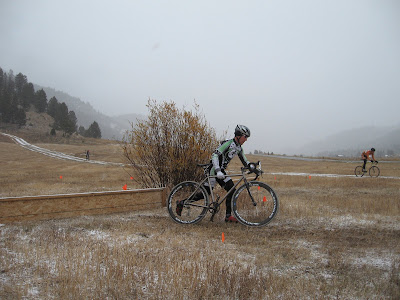 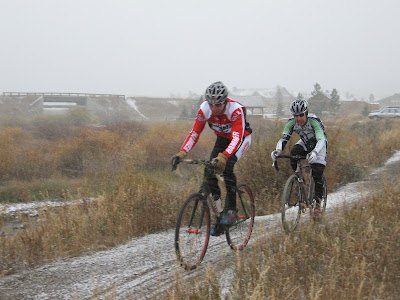 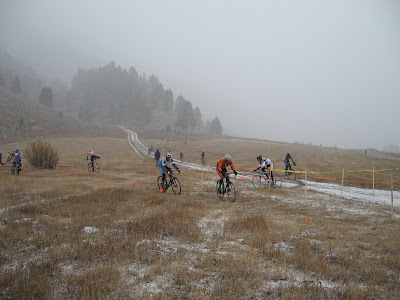 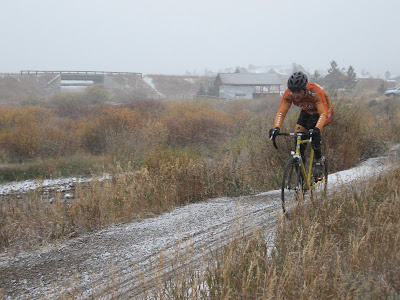 Saturday at Big Sky was a great day of Montana racing. The snow was flying and the wind was blowing. The course stayed firm, with accumulations really starting after the race was finished. I commend Alan Adams and the GAS crew for promoting is such extreme conditions. As we all know the only thing worse then racing in bad weather is setting up and tearing down a course in bad weather. Thank you.

The first race saw a great start by Guy from GAS rallying on his mountain bike. After a lap or two cat 4 phenom Karl Vanderwood and Jason Delmue emerged from the pack. They formed a big gap and looked strong the whole race. After that came a hard charging Genco and a Downtown Joel Brown sighting in 4th. It looked like Delmue had trouble with his pedals on the last dismount section coming off the hill. Vanderwood kept charging without even looking back and took a well deserved victory. It was nice to see Jason challenge Karl and I thought it was great racing at the front of the pack. The ladies race saw the return of A Frykman from the Team Delphine (back for more after her Helena debut), Julianna (sp) from Muleterro, and LC all returning to fight for the crown of top lady at Big Sky. There was one twist as a Kenda Titus rider showed up and took charge of the race early on. In true Lisa fashion she never gave up. It paid off as something happened to the leader and LC snatched another victory, building confidence towards Rolling Thunder.

The men's race had 21 starters! On possibly the worst day in MT cross this season the race still had 21 starters. I love it. I remember racing with 10 dudes on perfectly sunny days. Anyways, as you can tell from the title of this post Frank "The Bear" "The Tank" "Grey Wolf" Gonzalez finally gave us a peak of his un-matched power. Holy crap. He rode un-challenged for most of the race. I don't know if J Curry was having mechanicals or not, but I know he was having trouble clipping in. Regardless, John came in a solid 4th. Geoff P continued his sweet riding and slotted in for 3rd after a hard fought battle with Brad. Brad rode awesome for 2nd and added his name to a list of favorites for the Thunder Title. Another great ride came from Bill Martin who finished 5th. He kept consistent and it paid off with a podium finish. Other great rides of the day came from Dave Bergart in 6th (I don't know who he is but he's fast), and Chris Connelly who finished 11th. Props to Bill Cochran for grabbing the A's again (thanks for the encouragement out there).

Great race fellas! Well worth the trip from Victor, ID in the nice weather. Thanks for keeping the cross stoke alive.

I agree. Thanks for making us Victor out of town folk feel welcome. Wish we could have stayed longer and eaten more pancakes.