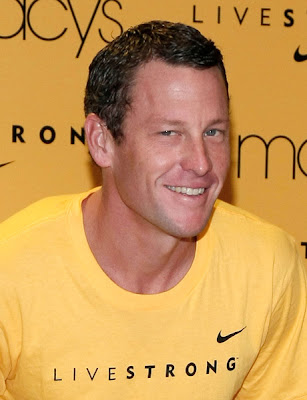 Everyone is talking about it. Lance's return to cycling. While the details aren't worked out it seems clear that Armstrong will return to the pro peleton for 2009. Everyone is asking the same questions. Here's my take:
Who will he ride for?
Well I seriously doubt he'll ride for anyone but Astana. Which thickens the plot. Alberto Contrador is the best stage racer in the world. He's already said that if he rides the tour next year he's going for the win (regardless of whether Armstrong is on his team or not). We might be looking at a less intense version of Hinault and Lemond. Lance will ride for Astana, do you think Trek would allow him to ride for another team?
Why is he coming back?
Lots of people seem to doubt his return being spurred on by promoting cancer awareness. While I think that's a part of it, I think Lance's return is primarily due to his ultra competiveness. I think getting beat by Wiens lit the fire within. Remember that Armstrong didn't loose much in cycling. He missed the competition.
How good will he be?
It's Lance Armstrong. He's not going to be bad. As you get older you don't necesarily drop off in fitness it's recovery time that suffers a bit. That said I don't think Armstrong has aged enough to really be effected. He knows what it takes to get his body ready. He's won the Tour de Georgia but he's never won the Tour of California. I think he steals the show from Levi in Cali, and wins won more tour with Bruyneel.
Is it good for the sport?
Yes. I love the Velonews web article that interviewed all the US Directors. They seemed super hesitant to say it's good for the sport. Well that's because they don't want to get robbed of America's crown jewels (Tour of Cali, Georgia, and France). With amazing Tour de Frances by Columbia and Slipstream they are finally gaining solid fanship in the states. Now Lance comes back and puts them on the back burner.
For fans like us this will be awesome. It's like Jordan coming back from baseball and winning more championships (sorry 1996 Sonics). You know he's going to win, it's just a matter of how.
Posted by Shaun Radley at 5:10 PM

I think it's good for cycling I know the American teams have made big steps and fan fare. But this is Lance he has the show and the go which we haven't seen much or any in a tour sence his retirement. I am a Lance junkie sorry. ML

"Lance junkie", those words seem to fit well with eachother. For the cynics out there, such as myself, I am curious to see how he does off the junk. Personally, I am not that stoked to have him back. Probably because I am a negative jerk, I think that LA is coming back because he is having lime light withdrawl symptoms. I have been having a wonderful time getting to know the other racers in this country via the air time they are getting. I am afraid that he will start to dominate the media as he did in the past and we will not have the opportunity to hear from the rising talent. It will be interesting though. Did you see the article in People? He lists the the races that he is going to do this year. I guess he is coming to do Rolling Thunder in Missoula, he said something about hoping to win a new KONA bike!?! He said, "Whether I have to buy 1,000 raffle tickets or I have to dress in drag and win the women's feild, I am getting that bike!".